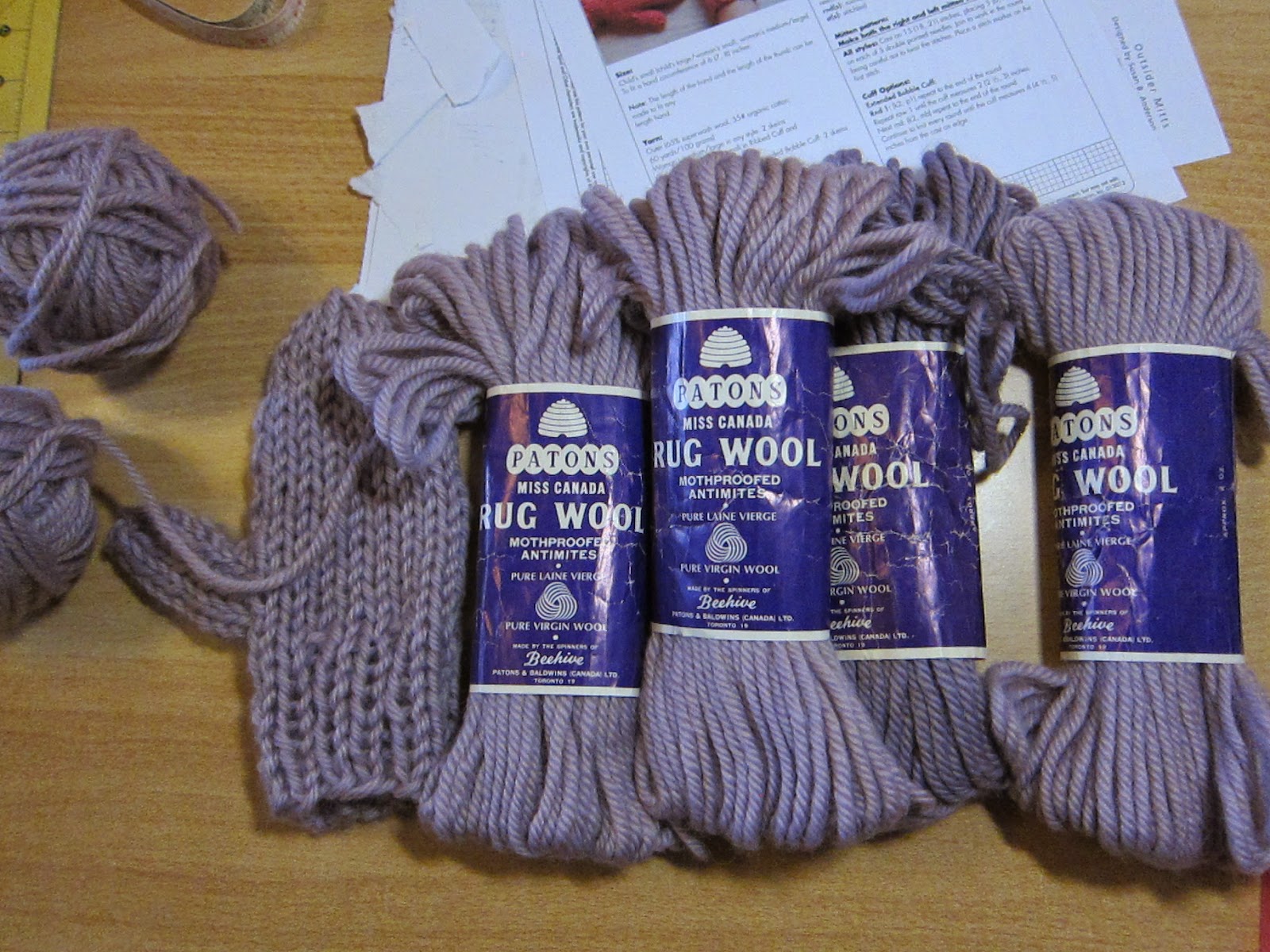 I found a bunch of superbulky wool at the thrift store, not knowing what I might do with it.  When the call went out for mittens for children,  I thought I might be able to do some magic. 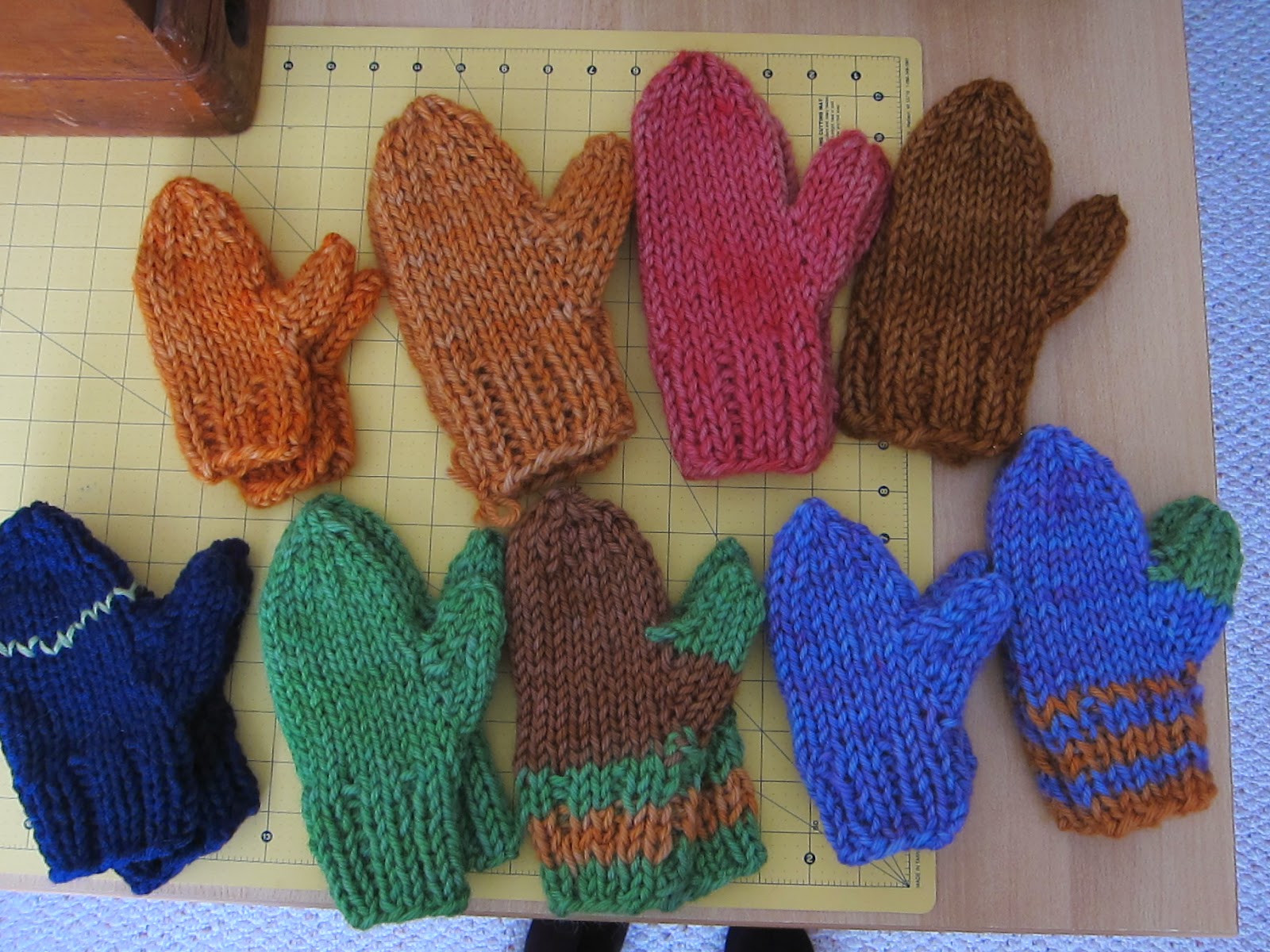 These mittens are going to children in one school, so I wanted each pair to be different.  I dyed the wool in batches ( and a couple of finished mittens) with Wilton's food coloring, the kind for cake decorating, and a big slug of vinegar.  The washing, dyeing, and vinegar treatment really softened up the wool.

I used Susan B. Anderson's free pattern Outsider Mittens.  It's a quick pattern on number 13 needles, though I made some pairs with number 11s, and I liked the firmer fabric.  The pattern is available in three sizes.

I hope these will keep some children warmer through the winter months.
at January 20, 2015 2 comments:

Email ThisBlogThis!Share to TwitterShare to FacebookShare to Pinterest
Labels: knitting 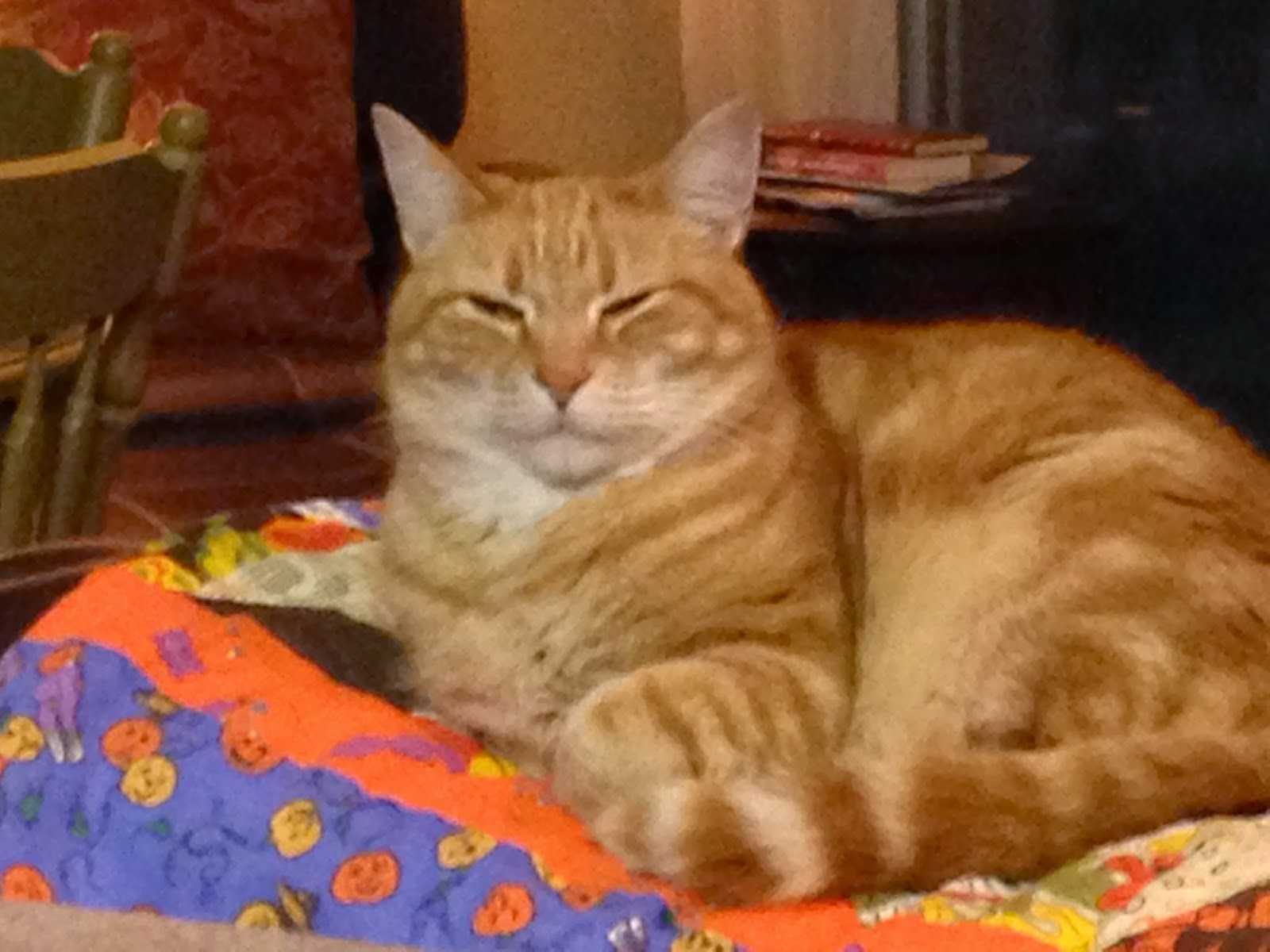 We lost Louie over the weekend to his failing kidneys.  To lose 2 cats in a month is a lot of grief to manage. 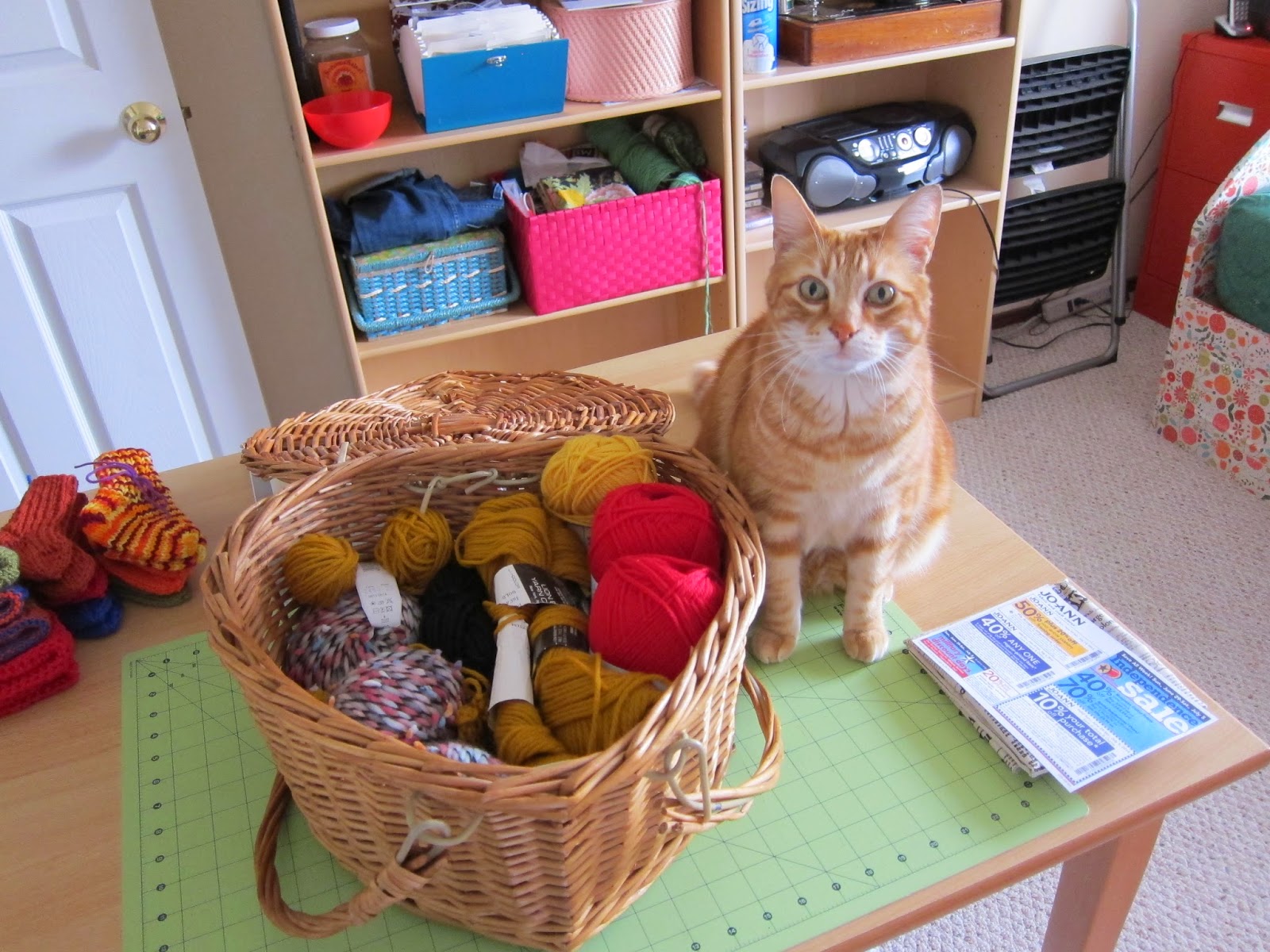 Louie was the sweetest cat I've ever had, and he was my sewing room companion. 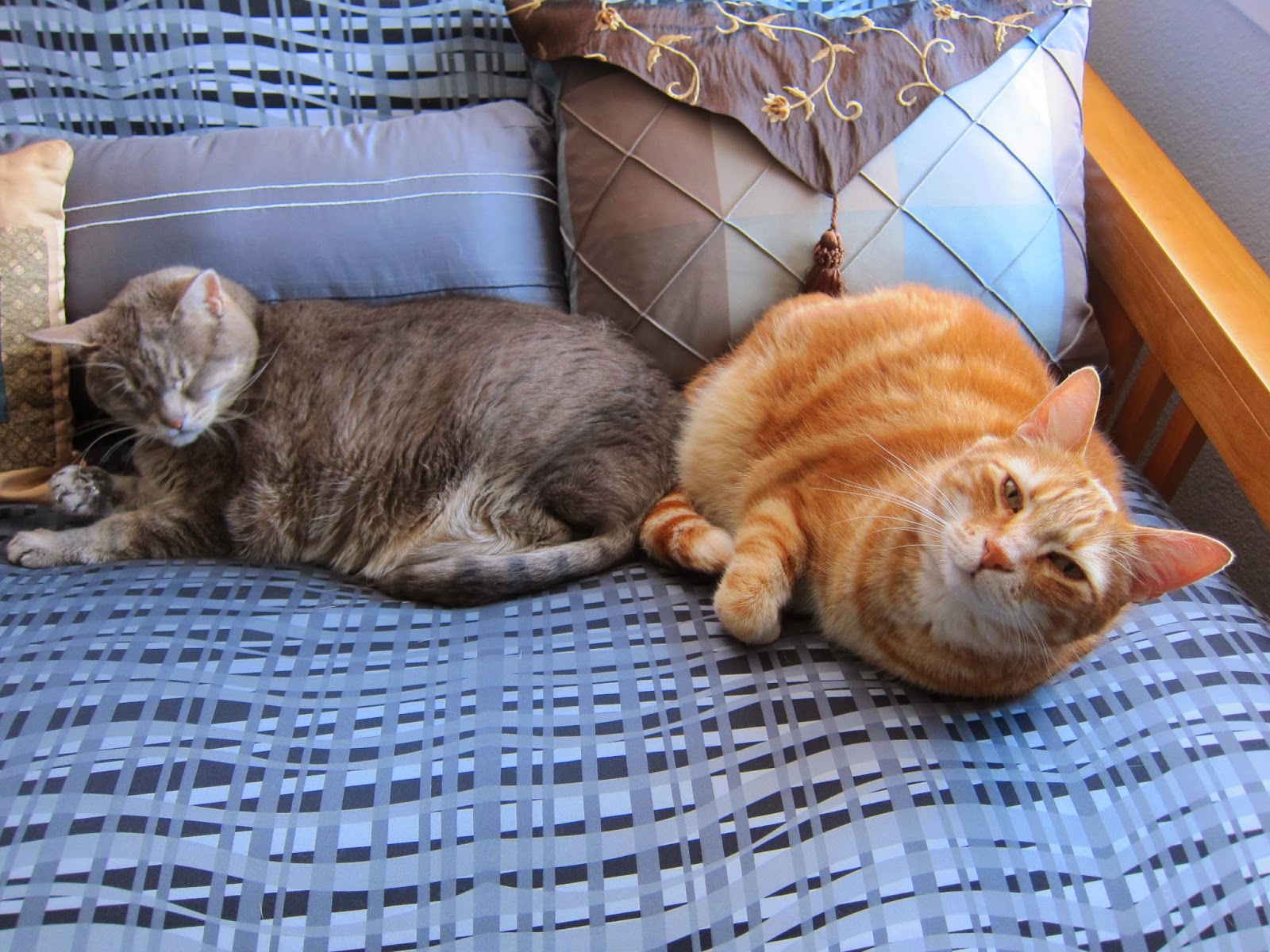 Now he's in Cat Heaven with Wee.  (That's Bunny with him in the picture, she's still very much with us). 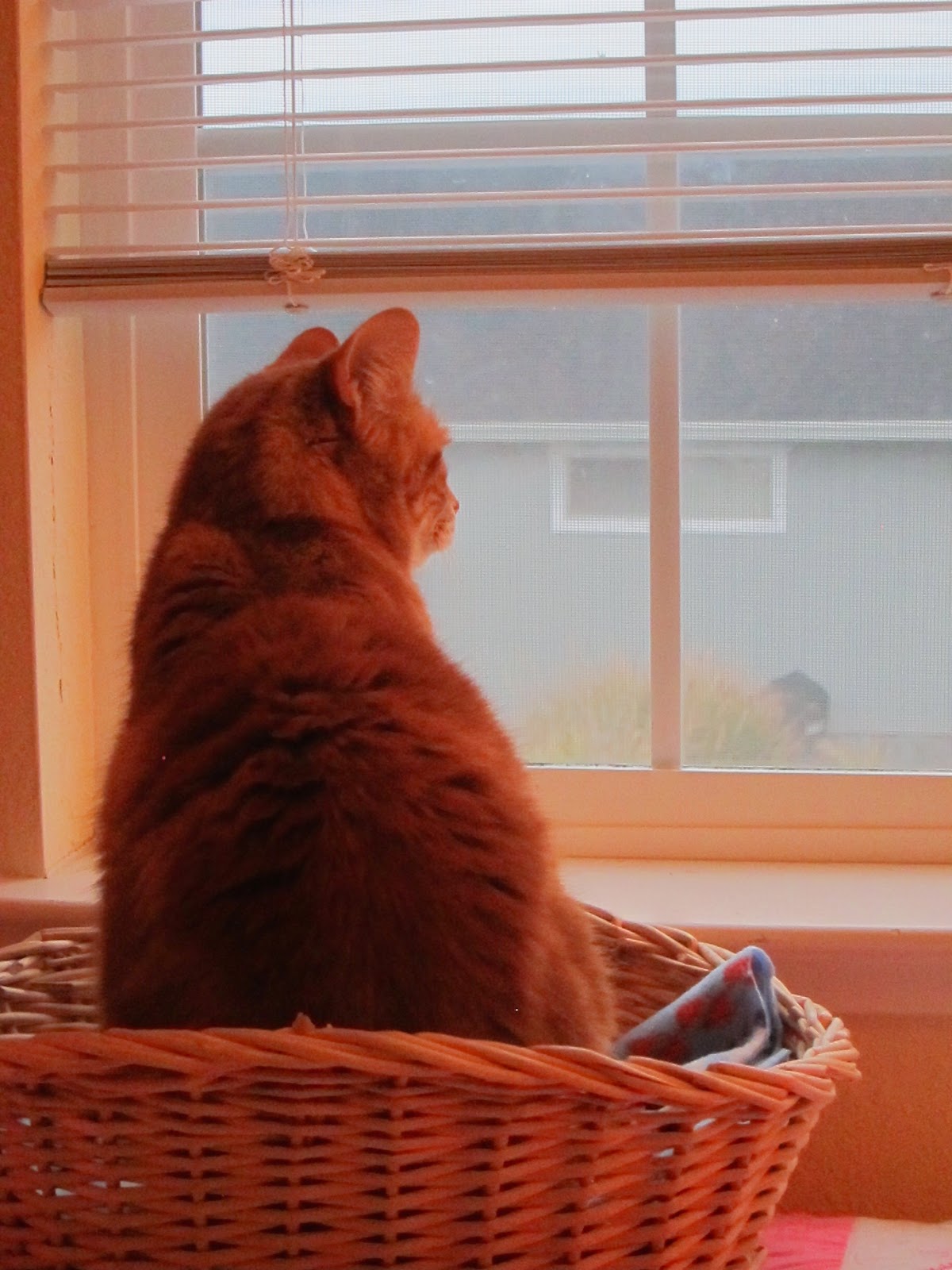 Louie and Wee are running in the grass and climbing trees together.

Email ThisBlogThis!Share to TwitterShare to FacebookShare to Pinterest
Labels: family 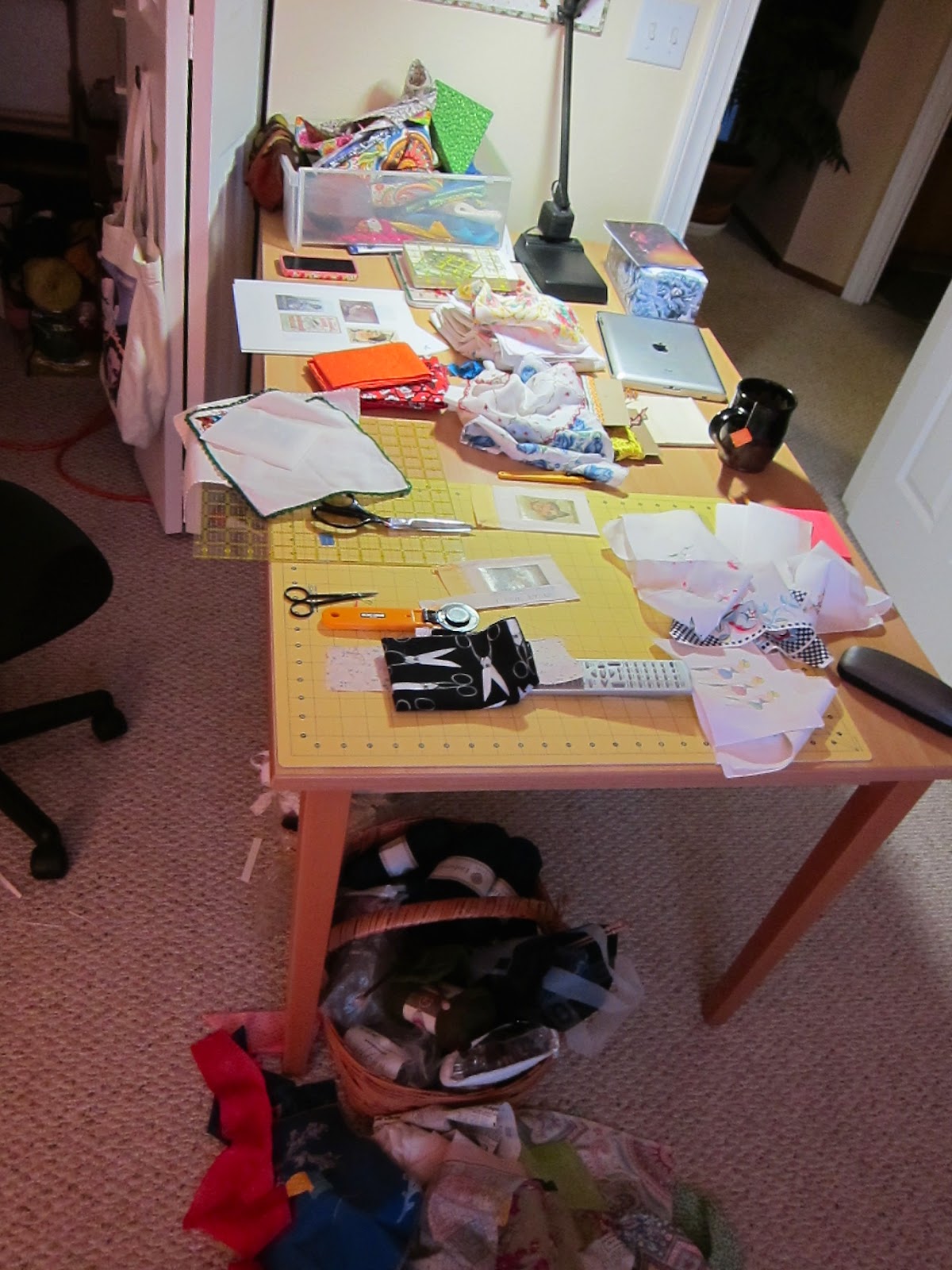 I'm beginning the year piecing blocks for a slow cloth project, my Mexican Jenny crazy quilt.  This quilt is a meditation on the story of Mexican Jenny, the woman who I wrote about in my book: a prostitute who killed her husband in a domestic violence altercation, and then made a crazy quilt while incarcerated in Colorado in the early 1900s.

I don't know about you, but when I piece blocks, it's a messy job.  I haul out all kinds of supplies, many of which end up strewn across the floor. 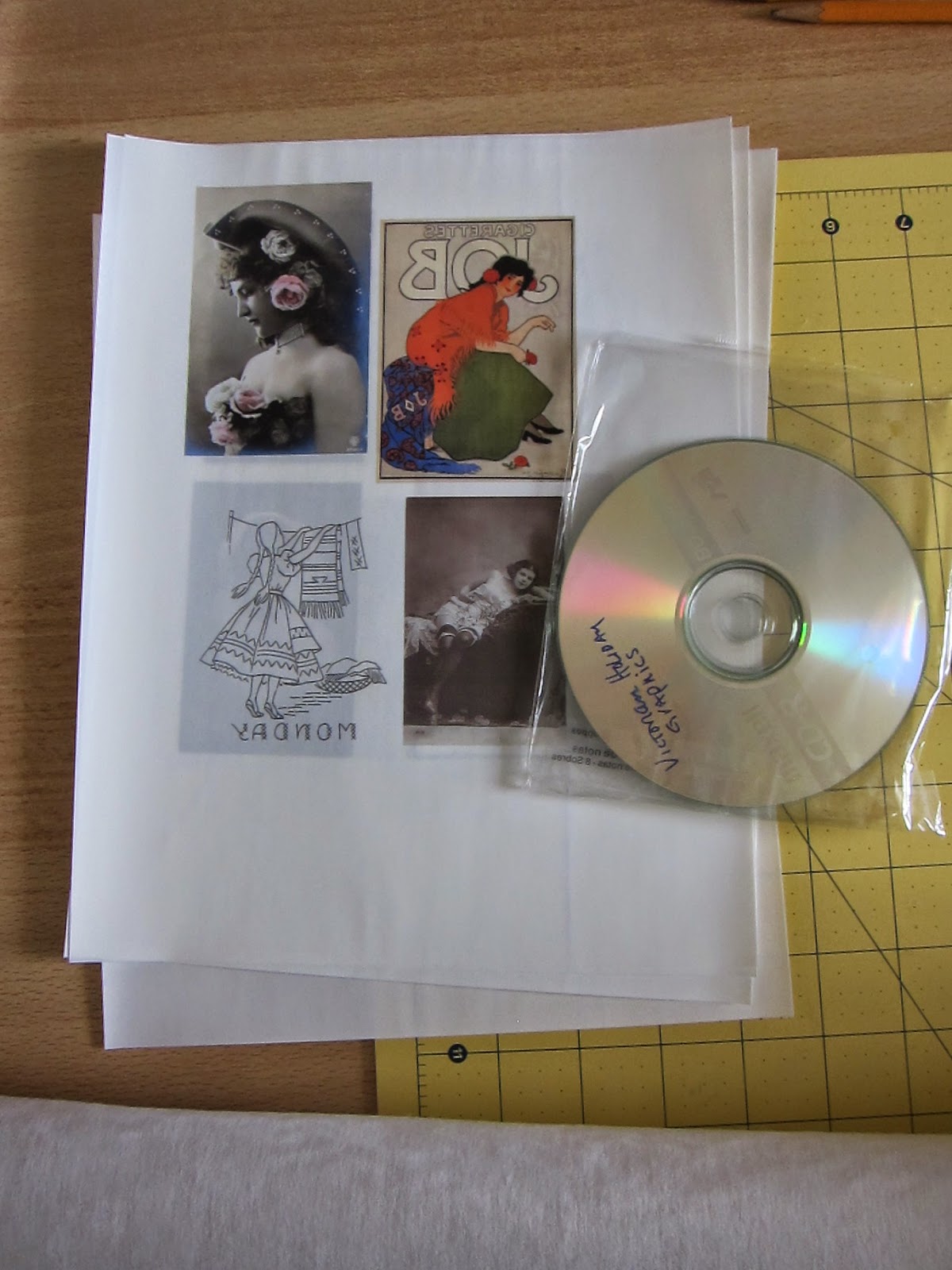 I began by collecting images that are historically relevant.  Some of these are images of women from vintage French postcards, others are from ads or other media. 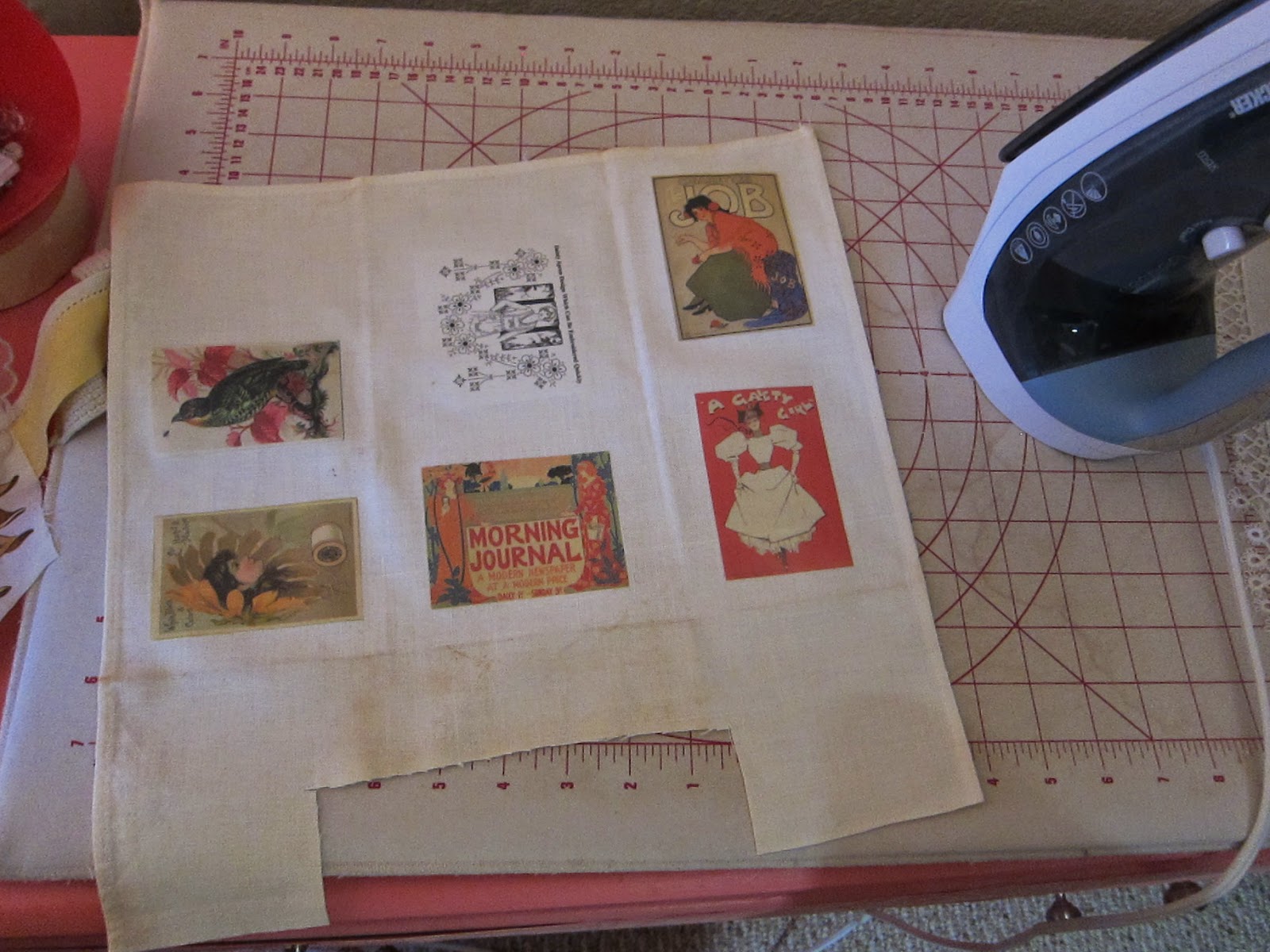 I use transfer paper to make motifs that I iron onto linen.  This is the kind of paper you can use to make transfers for decorating t-shirts.   These motifs are the focal points of the blocks.  I like using this medium because the images are crisp, but the downside is that you have to be careful not to iron them because they'll melt. 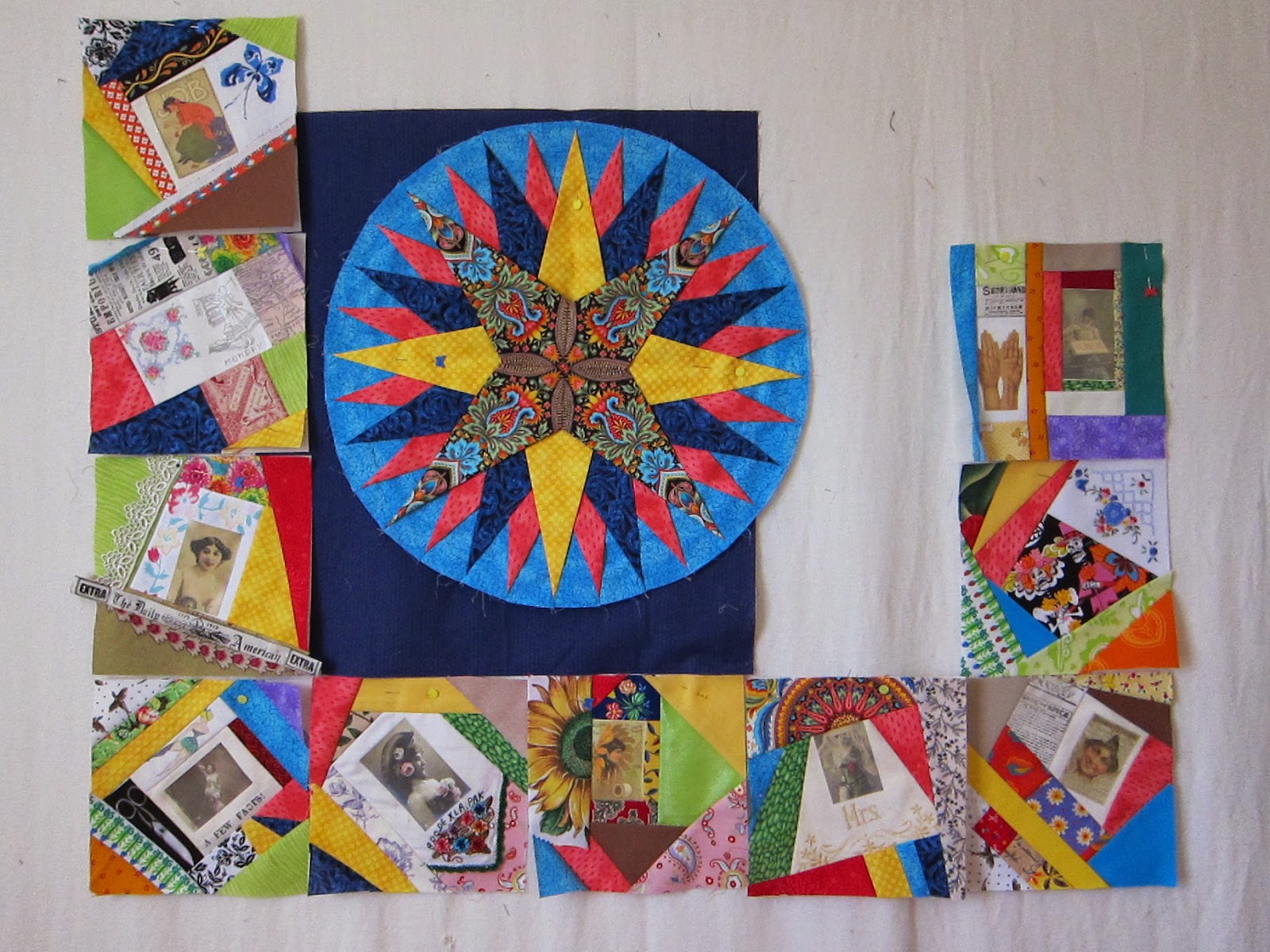 I've sewn up 10 blocks so far, and my goal is to finish the first round of 16 before I put away the supplies and start embellishing.  The blocks and the center medallion are connected by the repeated use of some of the same fabrics. 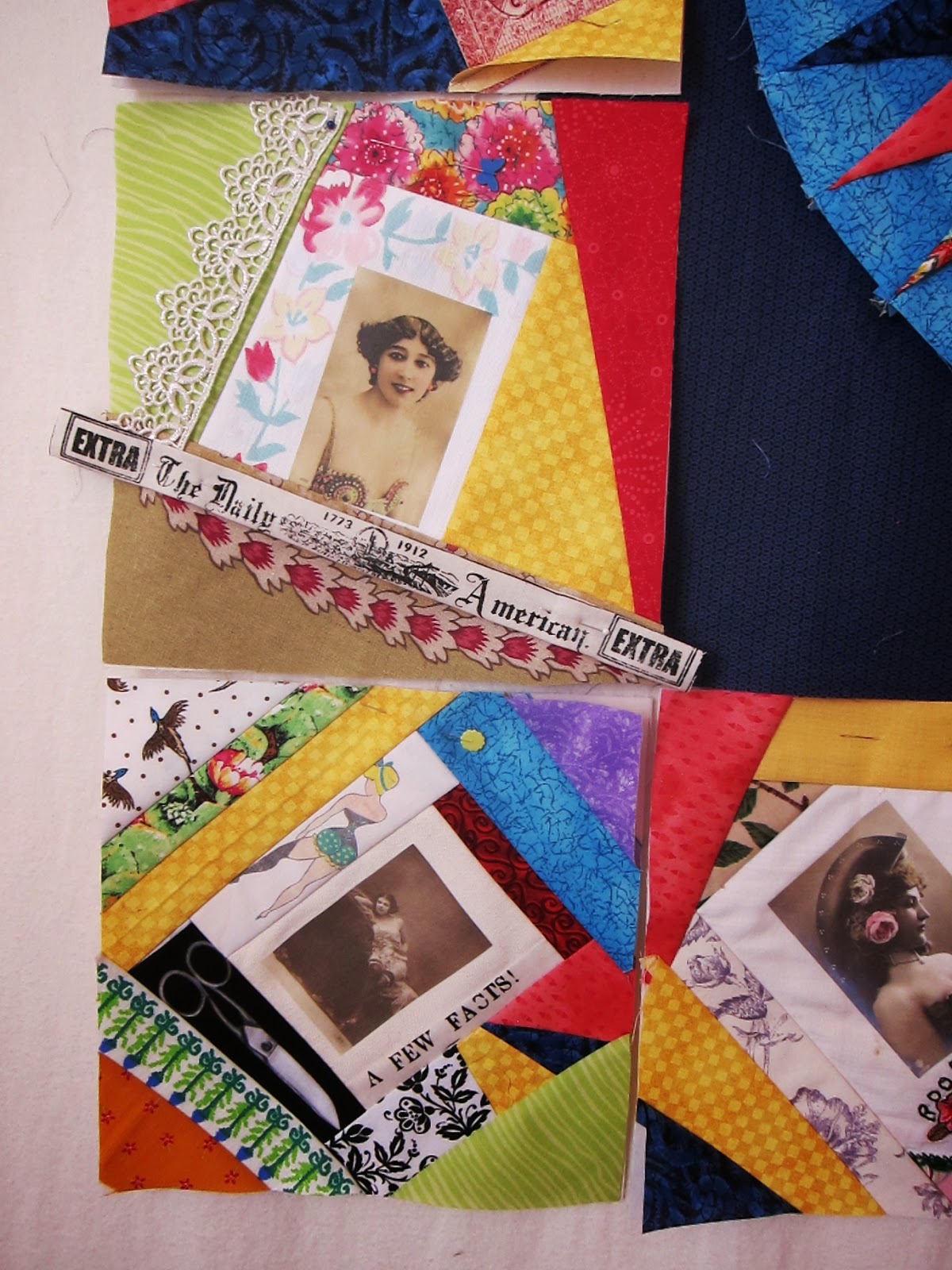 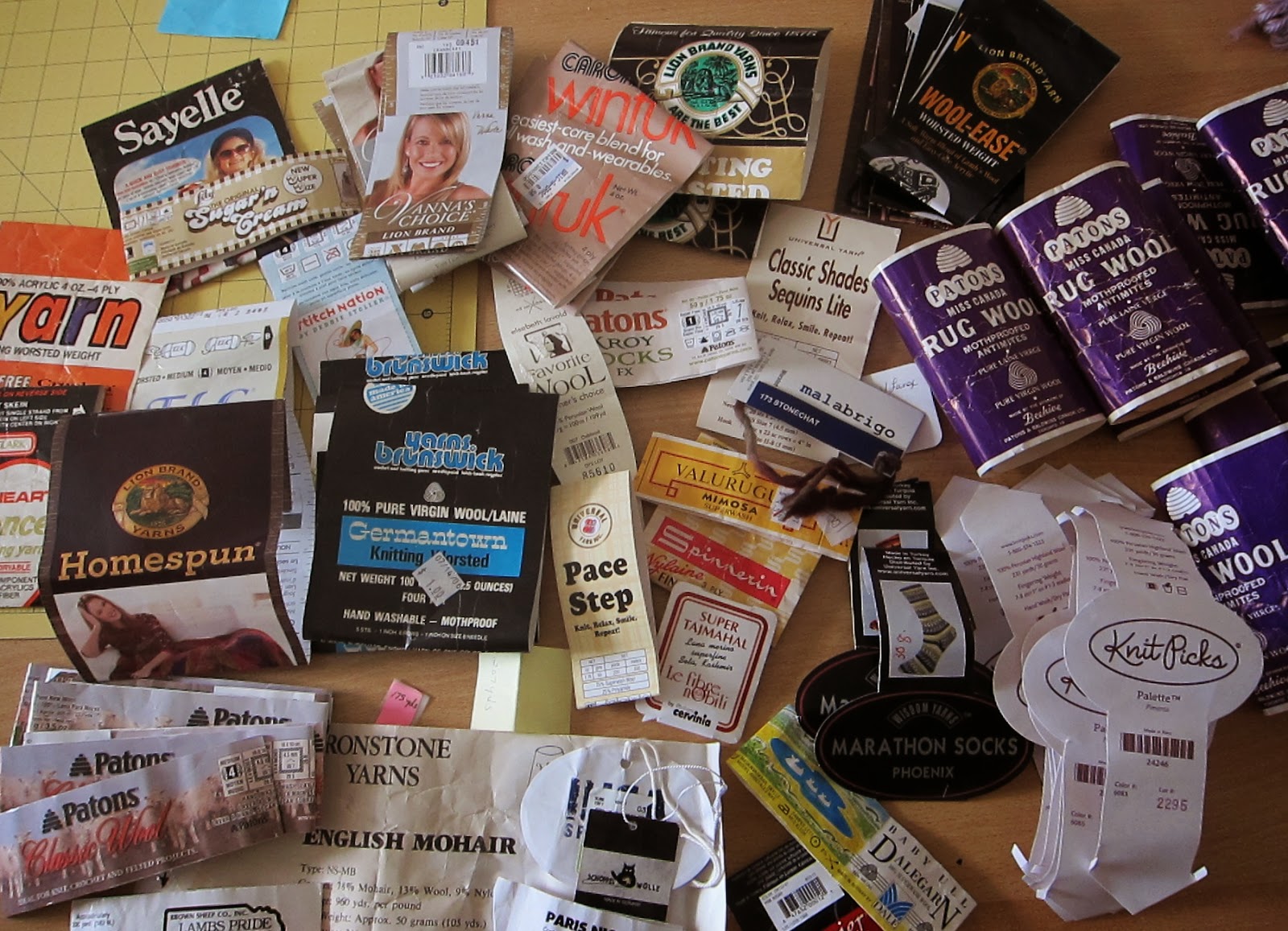 Last year I decided to keep the labels of the yarn I knitted up into finished objects to gauge how much yarn I used.  I happy to report that I used 85 skeins of yarn in 2014.  I've recycled last year's labels, and the collection process has started again. 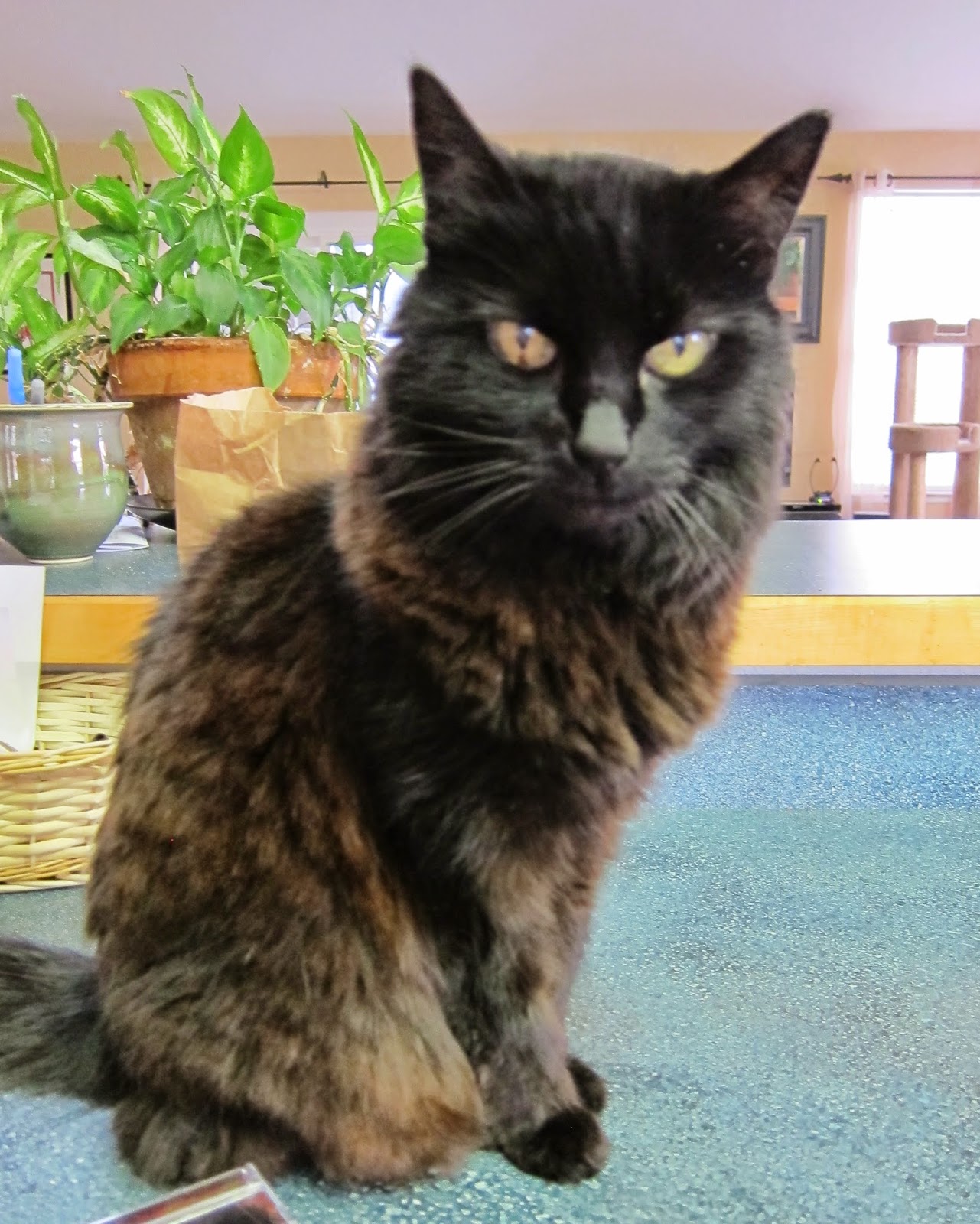 We had a loss over the holidays when our 19-year old cat Wee went to Cat Heaven on Christmas Eve.  She'd been a part of our family since she was a kitten and my kids were 5 and 7.  Although she had been losing ground for some time, it still came as a shock, and we were very sad to lose our old friend. 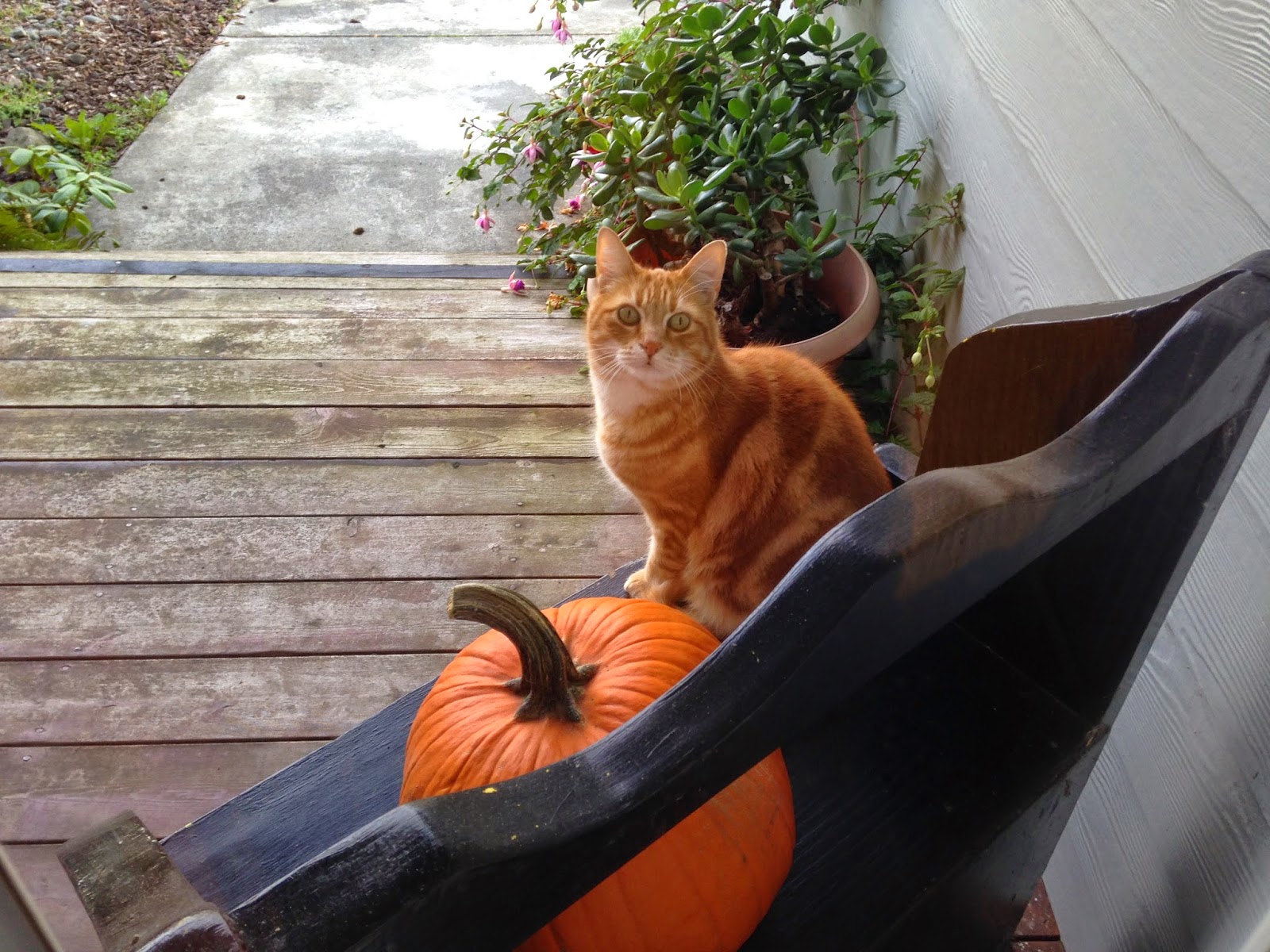 Less than a week after Wee's passing, my beloved cat Louie was diagnosed with kidney failure.  Though he's still with us, he requires extra care and I'm treasuring each day we have with him. 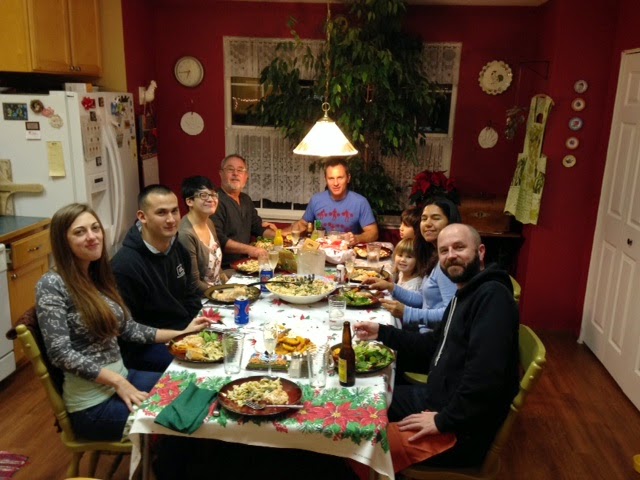 For New Year's day we had a celebration of what has passed and what's to come with children, step-children, step-grands, and in-laws.  It was an auspicious way to open the new year.  Whatever comes next, we are always in loving company.  Who could ask for more?
at January 06, 2015 3 comments: