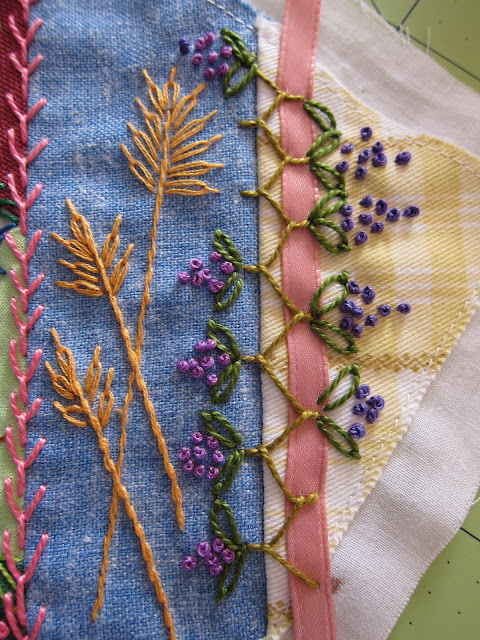 I used this week's stitch, the cretan stitch, to make some grapes for the wheat.  Cretan isn't one of my favorites, and some folks over at the Tuesday Stitchers group agree.  I used a piece of ribbon to help space the stitches, and I think that helped a lot. I hope it doesn't look odd that there are grapes missing around the wheat,  but I didn't want to layer one motif over the other.  The grapes are lazy daisy and French knots. 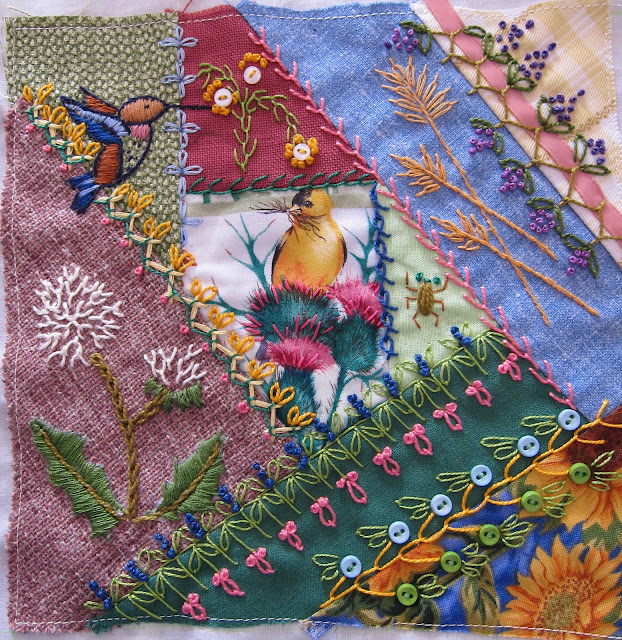 I'm pretty happy with the finished block.  One down, eleven to go. 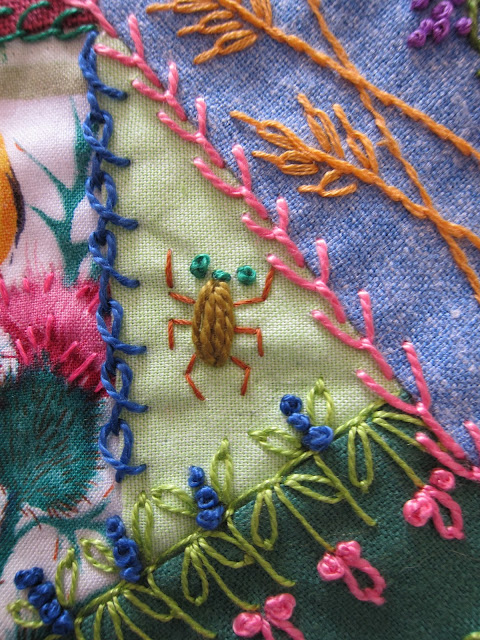 I added a bug for the birds to eat.  The blue stitch to the left of the bug is called snail's trail. 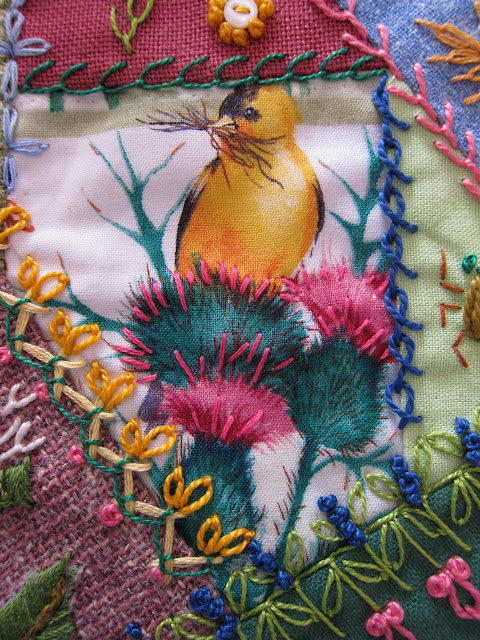 The stitch immediately above the bird's head was the dry run for the snail's trail stitch.  I got the loop going the wrong way, and this is how it came out.  Because it otherwise looked okay, I left it.  If this stitch doesn't have a name, I'm naming it Snail's Trial. 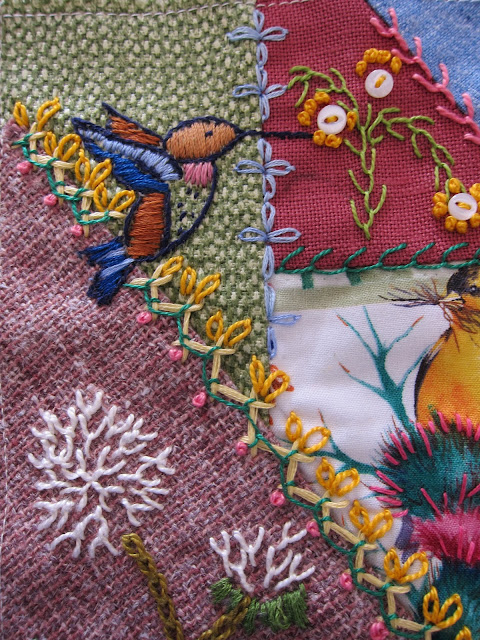 The combination of stitches that runs behind the humming bird is the one I'm considering replacing.  It's got a wrapped herringbone stitch as a base, and it's accented with yellow lazy daisy (that's the part of it I like) and some pink French knots.  I've decided that my wrapped stitches look messy, and the spacing changes behind the hummingbird.  I'm not going to tackle this now, but I'm going to think about taking this out and re-doing it in an edited form. 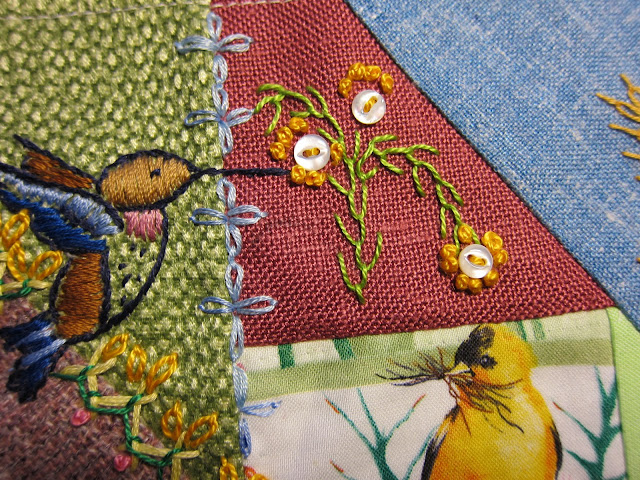 I used this week's feather stitch to make a little plant for the hummingbird I also stitched.  The hummingbird is made up of satin and long and short stitch, and I used the background fabric instead of stitching on its breast to mimic the iridescent feathers of a hummingbird.  In spite of the stormy weather I still see hummingbirds in my backyard.  They come for the scattered jasmine blossoms that have bloomed out of season on the porch. 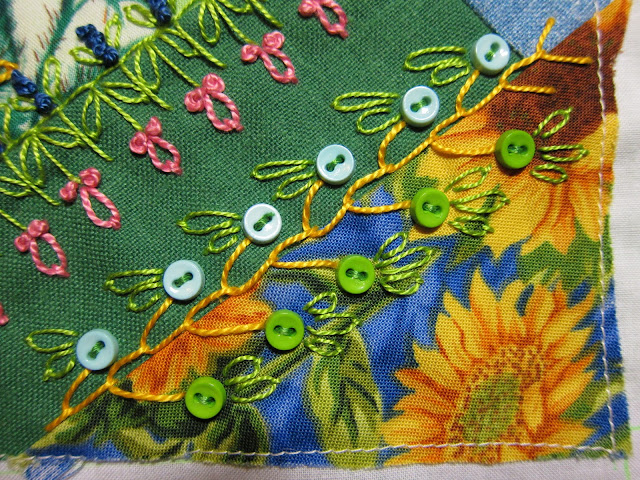 Here's another bit of feather stitch, embellished with buttons, that I actually made the week before.  I used perle cotton and some tiny buttons from JoAnn Fabrics. 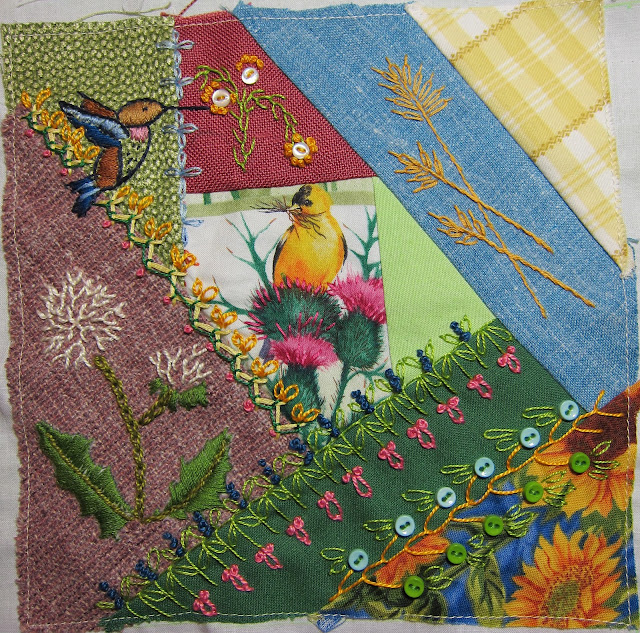 Here's an updated photo of the whole block.  It's a nice spring scene, a respite from the winter storms that have finally come late in the season, but with full force. 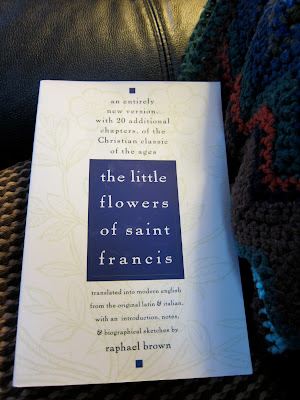 Before I decided to make this St. Francis piece, I coincidentally found this book at a thrift store.  It's a collection of popular stories about Francis written about a hundred years after his death. 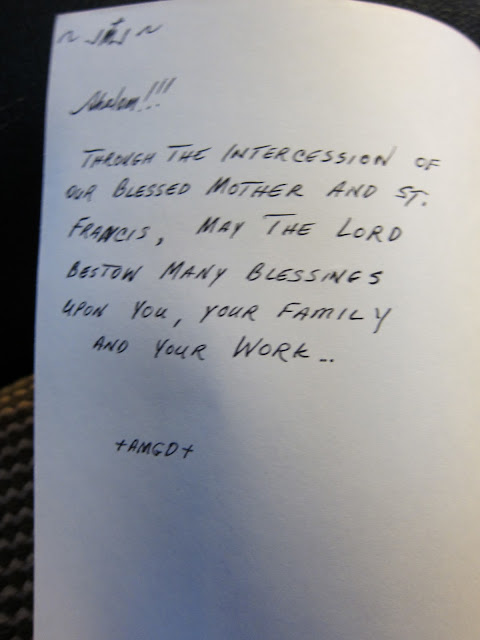 The book has this wonderful inscription, and I felt included in its good intentions.  I've long felt an attraction to St. Francis's story.  He was the son of a rich man who rejected all worldly goods and recognized the brotherhood not only between people of different social ranks, but between people and animals as well.

When I first thought of this project I though it might be in rustic browns like the Franciscan order's habit, but reading the book I came across a description of the place where Francis first undertook his work, a part of central Italy between the Apennine Mountains and the Adriatic Sea, considered an area of immense natural beauty.  When Francis and his friend Giles arrived in 1209, the introduction says they saw "deep warm valleys and sloping meadows rich in wheat and vines."

"While the two friars walked through the vast forests of poplar, oak, and beech, and inhaled the soft  fragrance of honeysuckle, clover, mountain lilies, and white roses mingling with the fresh sea breezes, it is no wonder that--as an old chronicle noted--'Francis sang aloud in French, praising and blessing the Lord for His goodness.'"

This description is guiding my design. 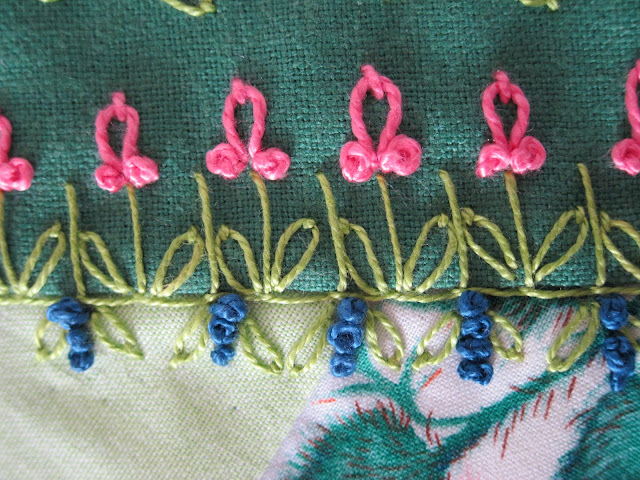 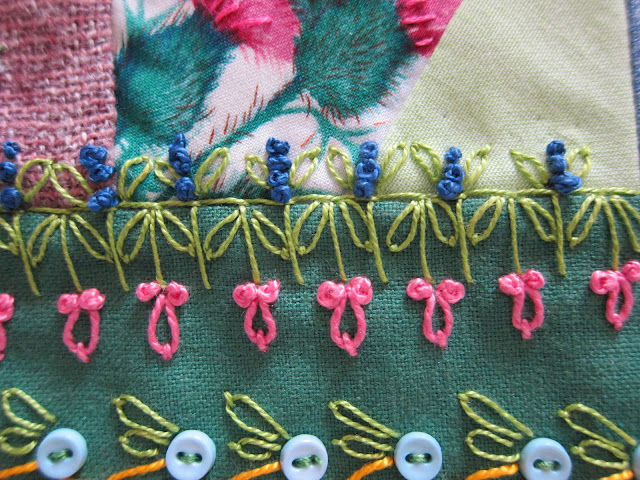 Here you can see the trim in its right-side-up orientation.  I like the way the flowers are growing in both directions of the seam.  At the bottom of the picture you can see part of my feather stitch and buttons seam treatment.  I found a package of tiny buttons at JoAnn Fabric in a coordinating colorway that I'm going to use throughout this piece. 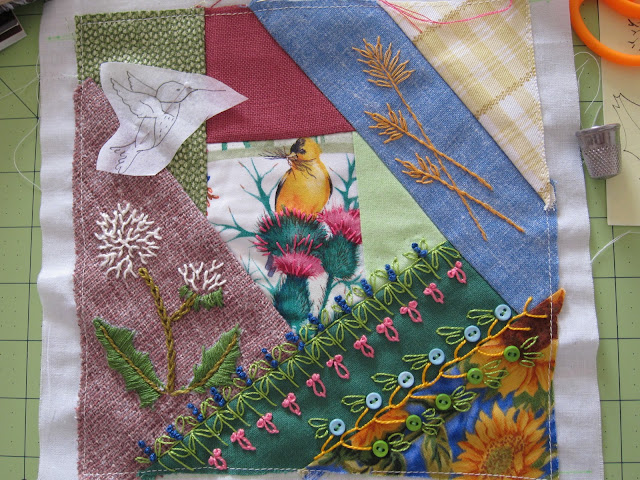 I've also added some wheat to one patch, and I've got a hummingbird positioned that I hope to embroider this week.  The outline is from an Aunt Martha embroidery transfer. 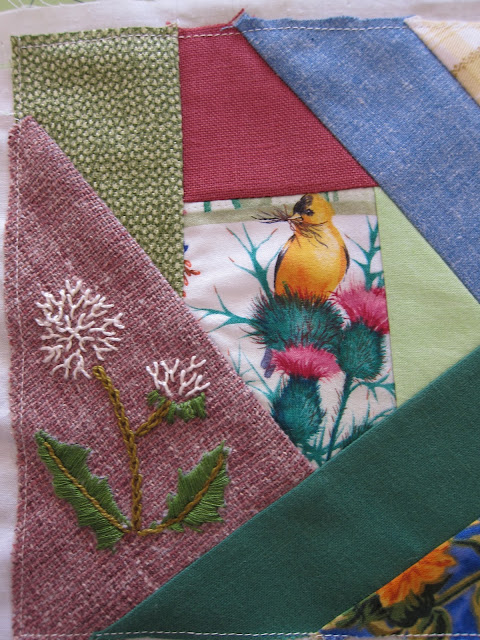 I'm participating in Take a Stitch Tuesdays and in the Crazy Quilt Journal Project this year (links in the sidebar).  My project for the year will be a wall hanging of St. Francis of Assisi.  I've posted my preparation notes  for this project on the Tuesday Stitchers blog. 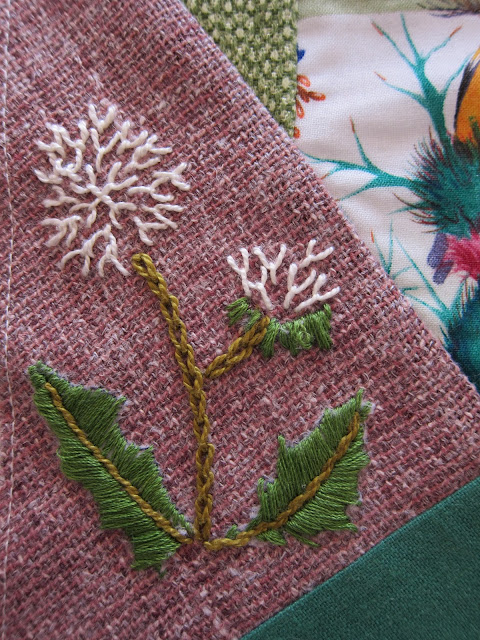 I get my best ideas when I'm waking up in the morning.  The idea for using fly stitch  to make a dandelion came to me this way. 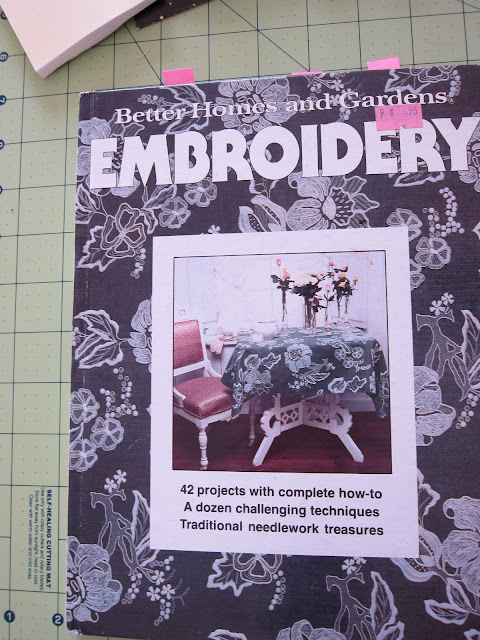 I remembered I have this old embroidery book.  If you look closely, you can see the thrift store price tag. 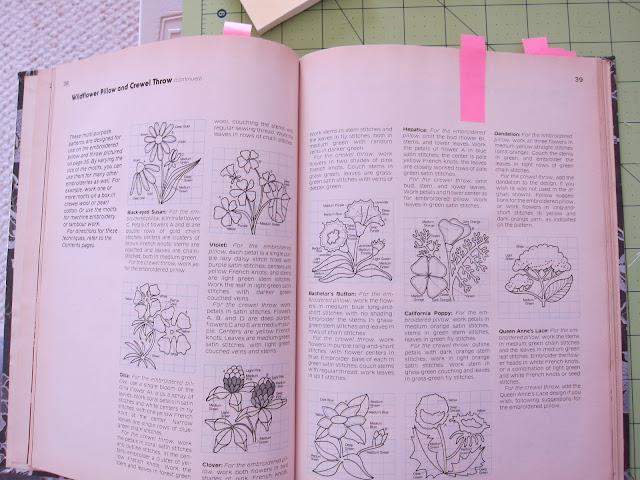 Sure enough, this book has outlines of wild flowers, including a dandelion (below right). 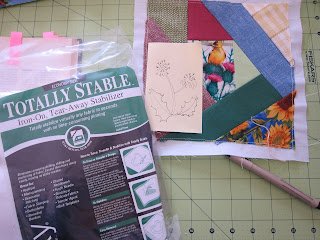 I sketched the drawing I wanted to use on a piece of scratch paper, and then traced it onto iron-on, tear-away stabilizer.  If it was an intricate drawing, I would have traced it directly onto the stabilizer. Once the image is ironed on, I stitch directly over it. 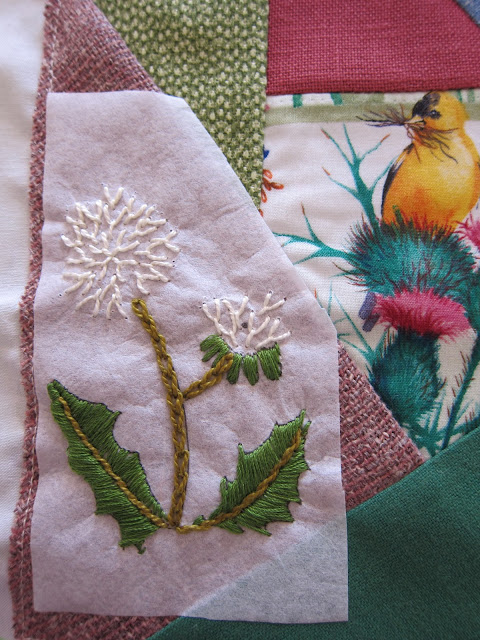 I used cotton floss for the leaves, and perle cotton for the rest of the image.  The dandelion fluff is made up of the fly stitch.  I think it makes a nice companion to the thistle in the printed focus fabric. 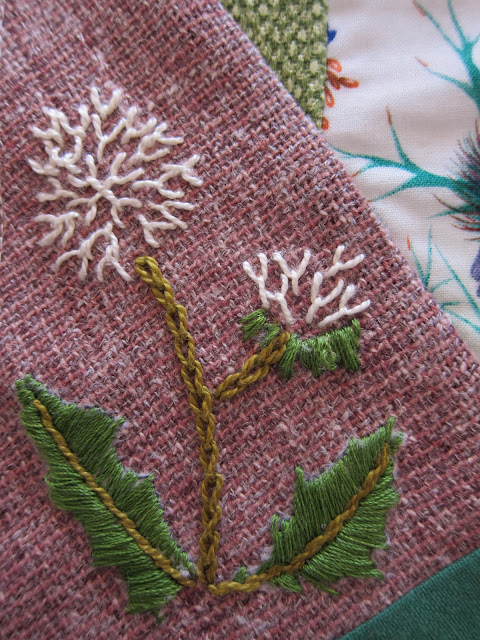 Once the stitching is done, you (carefully) tear away the stabilizer.  I'll get some tweezers to pull out some of the paper from under the leaves.

I'm working on seam embellishment next.  I realize I'm going to have to keep up the pace to finish a block a month.