Happy Christmas to All 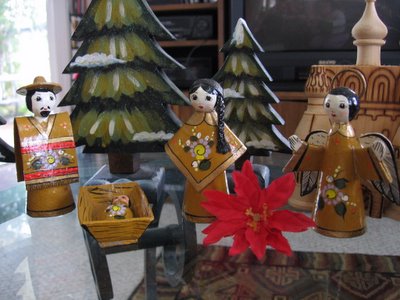 I love it when my kids have their friends over. The bustle and joking are contagious, and young people have an appealing energy. Last night my son Alex (in the white t-shirt) had his bandmates and another friend over. They played music in the garage, ate an enormous amount of food, then went to hang out at another friend's for awhile. When they came back, they were hungry AGAIN. 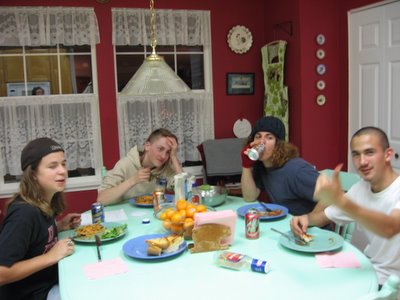 This is my daughter Allie and her new boyfriend Roger. Aren't they cute? She had just gotten out of the shower, so she thinks she looks terrible in this photo. I think they're both adorable. Later in the evening two of Allie's girlfriends came over and spent the night and Roger went home. 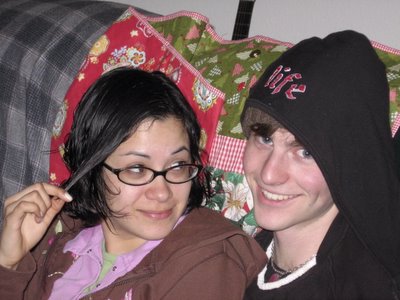 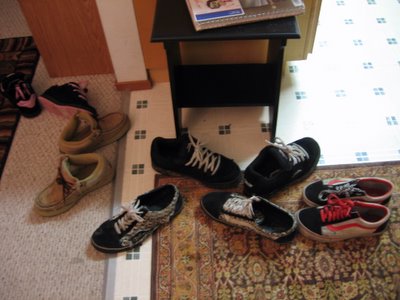 I had seven teenagers here overnight. The boys slept in the garage, which they thought was a big adventure. When they wake up they're going to want to eat again.
at December 21, 2005 8 comments: 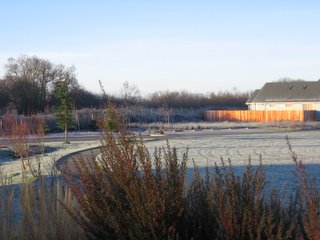 We're heading toward the Dead of Winter here, which means that it's pitch dark when I get up in the morning, and this last week it was also foggy and freezing. I actually heard a new term on the radio weather forecast: freezing fog. Lord, I live in a climate with Freezing Fog! What next? Today it resumed the normal Raining All the Time mode, so it shouldn't be so cold. I'm so looking forward to the kids being on school vacation this week, it just seems cruel to get them up in the cold dark mornings.

I'm trying to wrap up the semester's work, so far unsuccessfully. I have to turn in grades by midnight on Tuesday, which means that I'll have 4 whole days to get ready for Christmas. It wasn't always so inhumane. At one time we turned in Fall grades after New Years, but somehow, in spite of the fact that everything is done on the computer, the deadlines have been moved up. This means that I still have no Christmas tree, but I hope to get one tomorrow.

I've also celebrated my birthday since my last post. My kids paid for me to get a second piercing in each earlobe, so now I can wear two pairs of earrings at the same time. I must've been one of the last women in California with only one hole in each ear, but now I'm one of the crowd. And Michael surprised me with an unexpected gift: a scanner. Can you believe it? I never would've thought to even ask for one, and now my brain is spinning with the possible projects. What a guy! 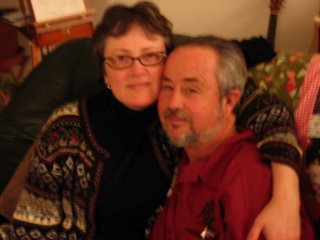 Allison (sorry I couldn't get the link to work, but there's a link in the index to the right) posted about finding a 19th century unfinished crazy quilt that she wants to use as a foundation for her own work. I replied about a similar project of my own, a set of Dresden Plates that I washed, mended and appliqued down onto blocks, which I then made into a quilt. Here are some photos of the finished quilt. 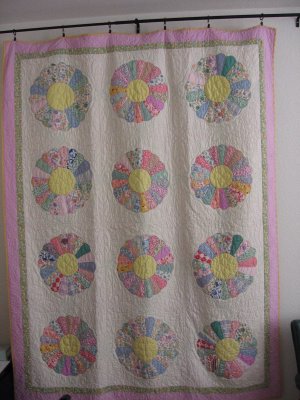 This is a shot of the whole quilt. I've had it hanging in my bedroom for a couple of months. I've got to take it down soon, as I've noticed that it's started to get wavy. I didn't use the sleeve, which would probably be a better choice.

My theory about this quilt is that the blocks were made by two quilters. This first photo shows an example of the blocks which were made by the more proficient quilter. The stitches were incredibly regular, the fabric looks like 30s feedsack, and the blocks are uniform in their construction. 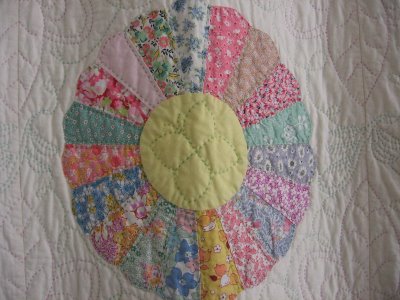 The other blocks have looser, less regular stitching. The Plates have random numbers of sections, so the sizes are different than the other blocks. These blocks also have repeated fabrics, (which the others don't) and some of the fabrics are of looser weave. I think perhaps these were cut from clothing, or were made from clothing fabrics. These blocks may have been made later than the first, since they don't adhere strictly to a 30's feedsack palette. 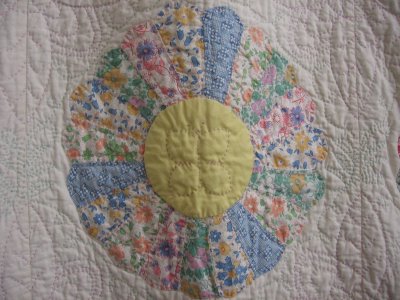 The story I tell myself about these blocks is that the less proficient quilter was the daughter or other relative of the expert quilter, and that she wanted, for sentimental reasons, to finish the unfinished project of the expert quilter. I tell myself that she chose the poorer quality fabrics perhaps not only because she was inexperienced, but also because these fabrics were sentimental--perhaps they were from the clothing of the other woman.

I was so moved by the story I "read" in these blocks that I wanted to put them together. I decided to hand quilt this quilt since the blocks were constructed by hand. Since I was going to hand quilt, I wanted my work to show, so I used embroidery floss in those 30's colors. This was my artistic contribution to this collaboration. 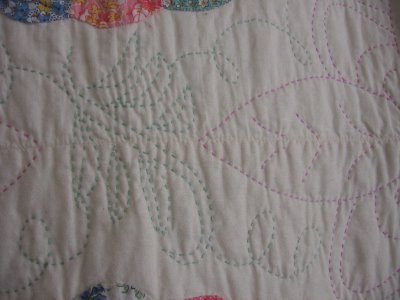 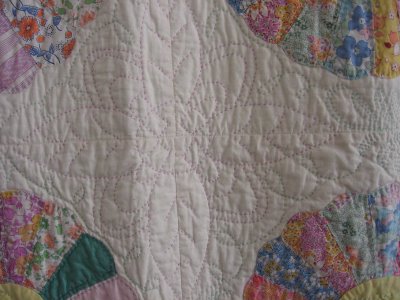 I have an strong attraction to these kinds of projects. I'll post soon about the 1930s quilt kit with one block made that I've got stashed away. Maybe I like the idea that all those UFOs are not destined to some eternal limbo. Someone will come along who understands the investment of love and time that is in these works. These projects speak to those of us who start them, but they can also be understood by others who also appreciate their allure. That's my theory anyway.

Oh, and here's my new haircut. Gosh, but this is a great angle for a photo--absolutely no neck sag or jowls in the picture. 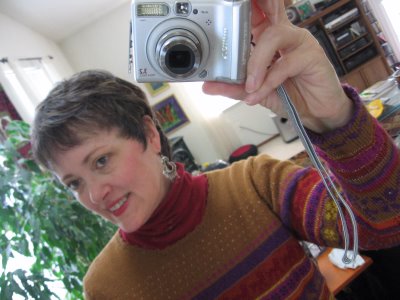