Fabric at the Movies 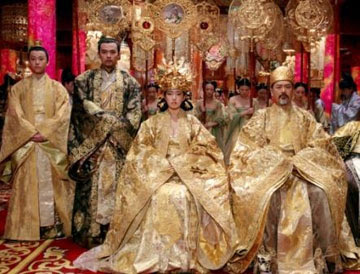 I don't go to the movies that often, but I went to see Curse of the Golden Flower not knowing what to expect, and found it to be full of great eye candy. It has an interesting palette: gold predominates, with pink and red coming in a strong second. I loved the gold, but I'm undecided about whether or not I liked the pink and red. The costumes are opulent with lots of diaphanous fabrics and heavy brocades. As a bonus: embroidery is part of the plot. I'll warn the sensitive that there's a big bloody battle sequence, complete with flying ninjas, but it's one of those very stylized representations that seems, like the rest of the film, more epic than realistic.

I think the film has a quesionable message about the consequences of resisting authority, but the visuals are intriguing, and I always like a fiber-oriented plot.
at January 28, 2007 6 comments:

Email ThisBlogThis!Share to TwitterShare to FacebookShare to Pinterest
Labels: movies 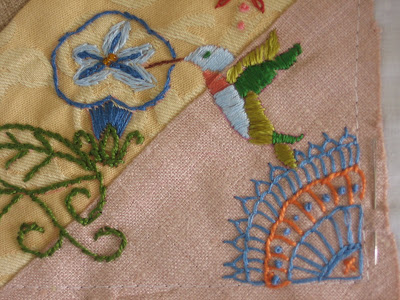 I'm currently working on a project both as part of Sharon B's Take a Stitch Tuesday challenge and for the Quilt Studio 2x12x12 Portfolio Challenge (sorry, couldn't get the link to cooperate). I've made a buttonhole stitch fan 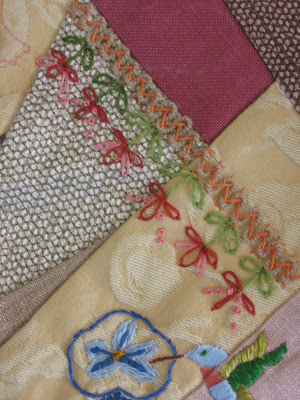 and a seam treatment with laced herringbone stitch, detached chains, and French knots. The hummingbird and morning glory is courtesy of an old Aunt Martha embroidery transfer. It's amazing how handy those can be.

I'm also knitting a sweater for my daughter. She picked the color, which I love. 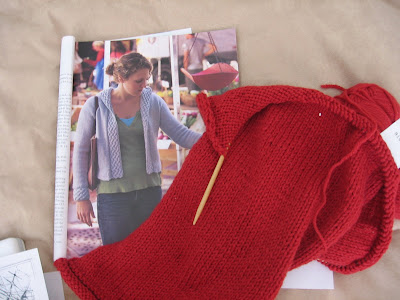 I just finished the back, which is basically a big rectangle, and I just cast on one of the fronts, so I'm starting the cable stitch band. Now I'll have to pay attention. I actually love mindless knitting, so for me the best part of the sweater is done. 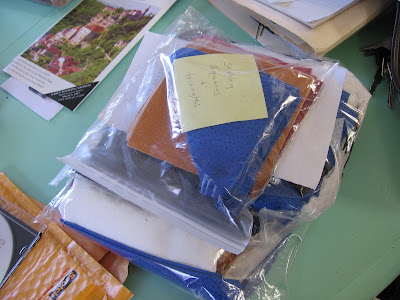 Yesterday was a great mail day. I got the parts for a 40 Quilt Service Project quilt from Julie that I'm going to assemble and then pass on to another quilter to finish. This project is going to be donated to a children's charity. I also got a lovely CD of birds from Debra. Wasn't that nice?

Speaking of sharing, I'm recovering from my second bout of flu since Christmas. This lastest one I must've caught on the plane on the the way home from my vacation. Then rather than stay home, I dutifully started back to work and promptly infected practically the whole faculty of my department. "Thanks for sharing," eveyone says politely. At least they haven't started addressing my emails to Typhoid Barbara.
at January 23, 2007 6 comments: On New Year's Day Michael and I flew to Southern California to begin our week-long cruise to Mexico. Neither one of us had taken a cruise before so we weren't sure what to expect, but the timing was right and the price was in our budget and we both love Mexico, so it seemed like a safe bet.

The coolest thing was traveling by ship. It's amazing to be constantly surrounded by water. We had wonderful sunrises and sunsets throughout the trip. We got a stateroom with a balcony, and we spent a lot of time just sitting and watching the ocean go by. 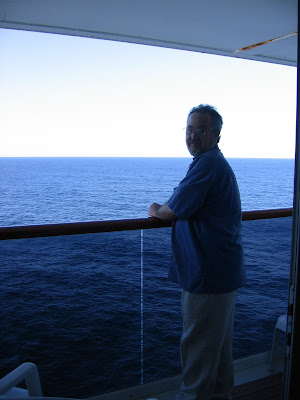 The staff was attentive and friendly, the ship was clean and well-run, and the food was good (sometimes very good) and plentiful. It was a bit of a challenge for Michael to eat sometimes as a committed vegetarian. I'm a more relaxed vegetarian, so I eat fish, and I'll eat anything if I decide I really want it, but the vegetarian options were sometimes limited. 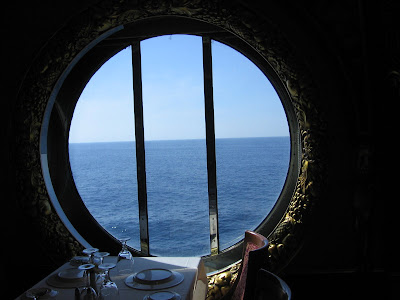 Once we were at sea a day or two the weather warmed up and we had three lucious days in port with weather in the 80s. The first port, Acapulco, was one of my favorites because we got to visit Fort San Diego. The current fort was built in the 18th century, and has been converted into a museum documenting the important trade route between Mexico and the Philippines, which connected these two important sites of the Spanish empire for 250 years, and which brought Asian goods and cultural influences to Mexico (and vice-versa). One of the important commodities of this trade were textiles, and expecially silk. There were wonderful examples of silk embroidered objects. Asian textiles and embroidery influenced embroidery and textile arts in Mexico because of this exchange. 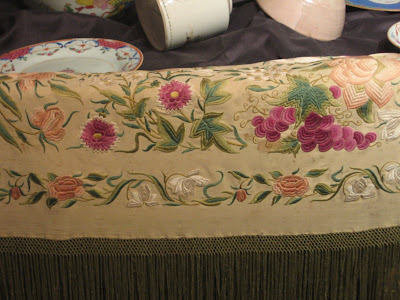 When I arrived back home it was actually snowing, so it was good to get a reprieve from the winter weather. I've returned with lots of photos and ideas for new projects.
at January 15, 2007 5 comments: