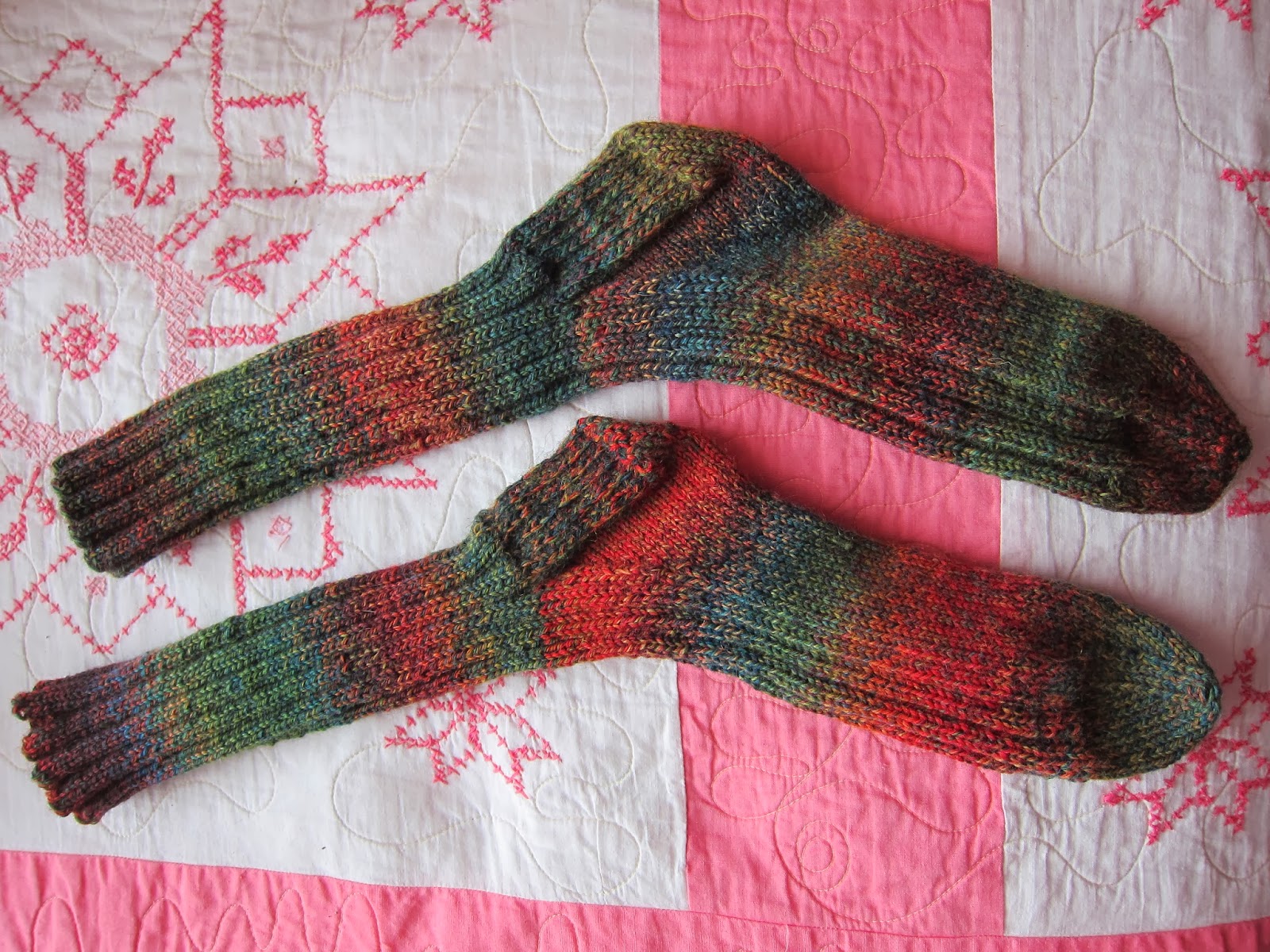 I'm happy to report I finished my socks.  I don't know how many years it took me to finish this pair, but I remember knitting the leg of sock one on the train from Nice to Florence when we went to Europe a couple of years ago. 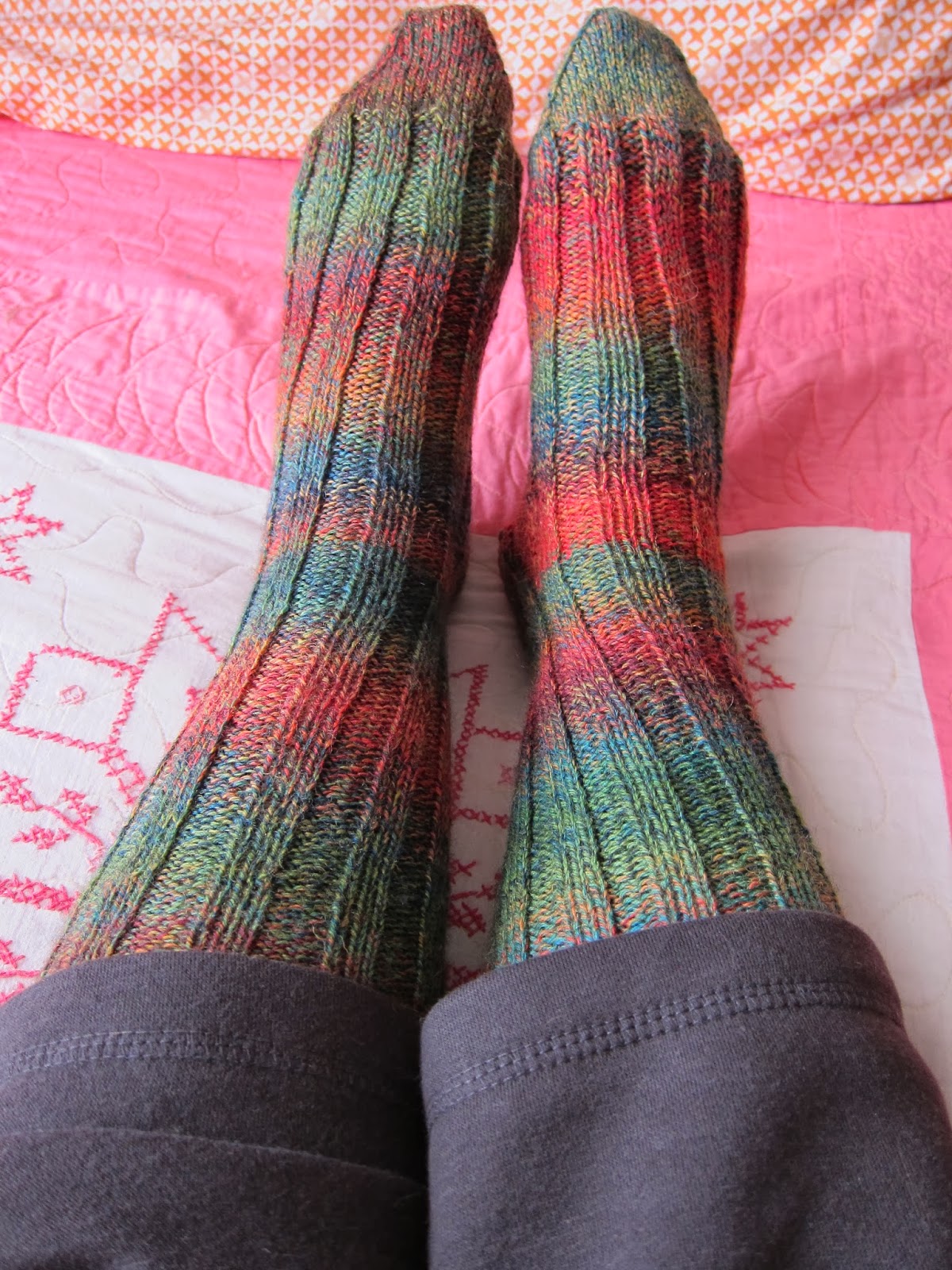 I love these colors, and nothing beats the feeling of hand knit socks.  Finishing up a pair of socks reminds me of the poem "Ode to My Socks" by the Chilean poet Pablo Neruda:

Mara Mori brought me
a pair of socks
which she knitted herself
with her sheepherder's hands,
two socks as soft as rabbits.
I slipped my feet into them
as if they were two cases
knitted with threads of twilight and goatskin,
Violent socks,
my feet were two fish made of wool,
two long sharks
sea blue, shot through
by one golden thread,
two immense blackbirds,
two cannons,
my feet were honored in this way
by these heavenly socks.
They were so handsome for the first time
my feet seemed to me unacceptable
like two decrepit firemen,
firemen unworthy of that woven fire,
of those glowing socks.

Nevertheless, I resisted the sharp temptation
to save them somewhere as schoolboys
keep fireflies,
as learned men collect
sacred texts,
I resisted the mad impulse to put them
in a golden cage and each day give them
birdseed and pieces of pink melon.
Like explorers in the jungle
who hand over the very rare green deer
to the spit and eat it with remorse,
I stretched out my feet and pulled on
the magnificent socks and then my shoes.

The moral of my ode is this:
beauty is twice beauty
and what is good is doubly good
when it is a matter of two socks
made of wool in winter.

There are so many striking images in this poem.  I think I'll borrow the image of "woven fire" as a nickname for my socks. 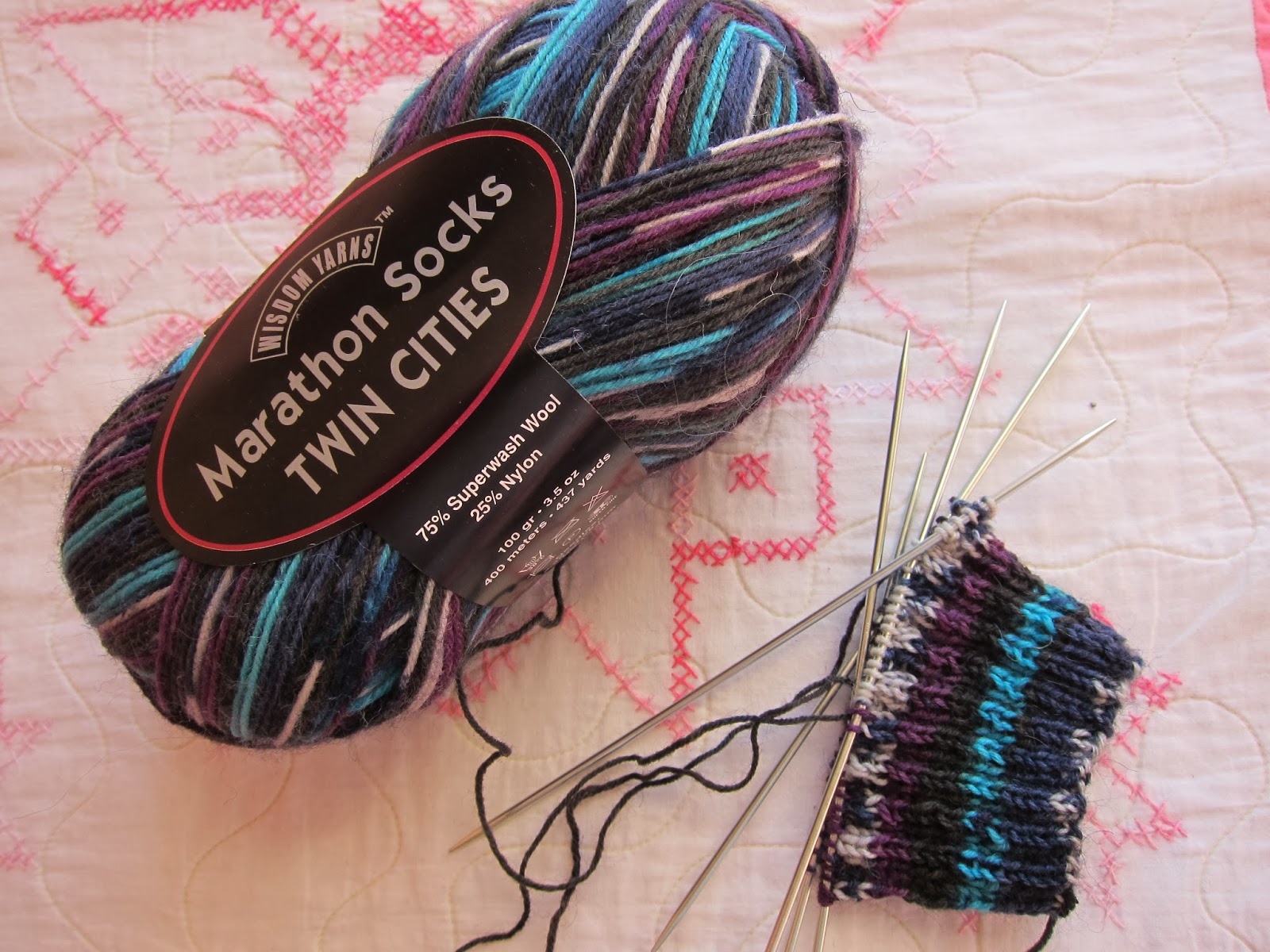 Inspired, I've cast on another pair.  Although I have successfully used a variation of the Roza's Socks pattern several times to knit socks that fit me perfectly, I'm feeling adventurous, and trying a new pattern, Laura Linneman's After Thought Heel Socks.  I figure if they don't fit me, they'll fit someone, and bring them the pleasure of feeling their feet like"two fish made of wool."
at January 14, 2014 3 comments:

Email ThisBlogThis!Share to TwitterShare to FacebookShare to Pinterest
Labels: knitting 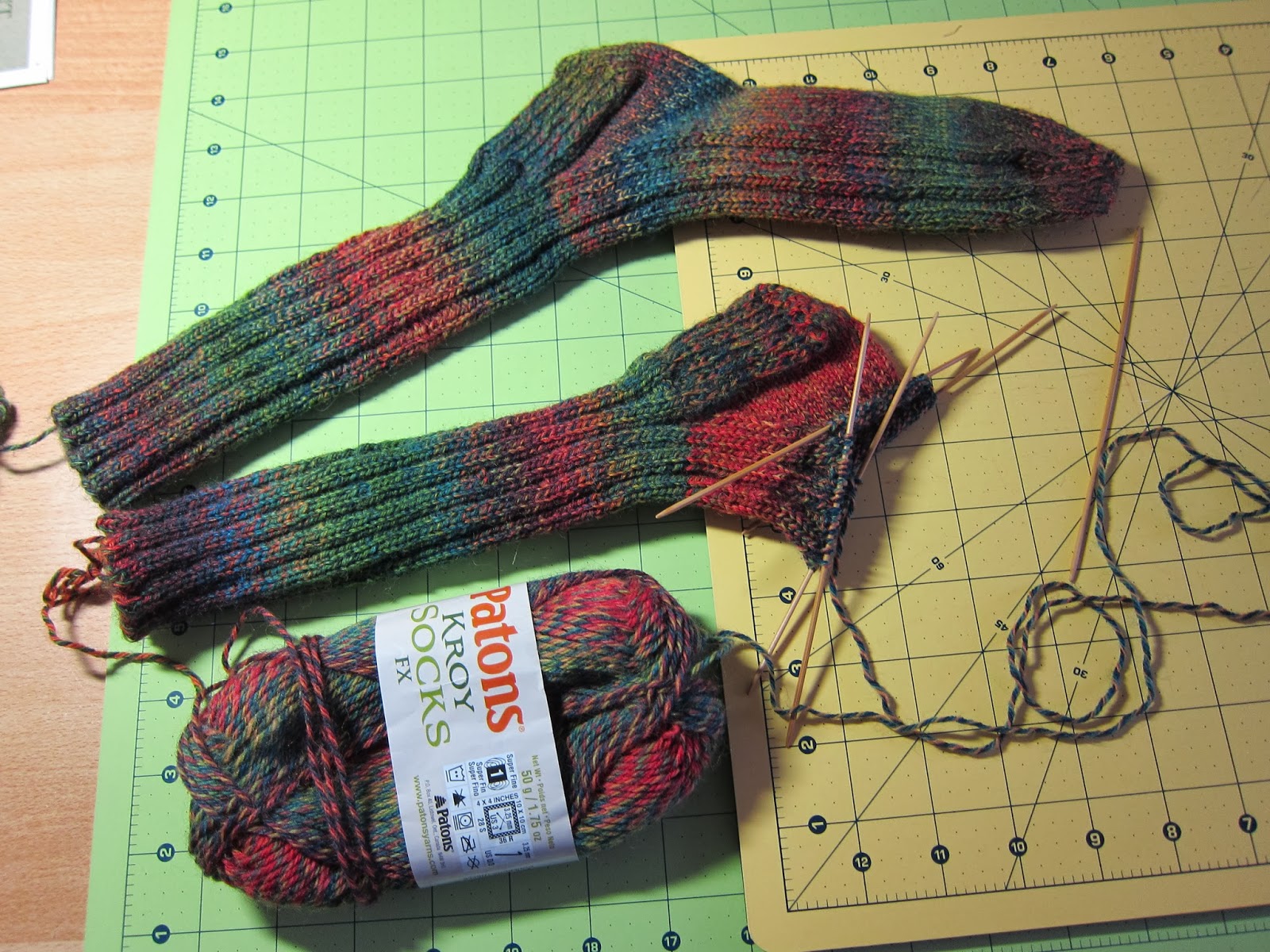 I'm not typically one to make new year's resolutions, but it seems efficient to have some creative goals for the year.

I want to finish the quilt that is taunting me from my design wall.  Quilts are slow going for me these days, so finishing this one will be an accomplishment.

I want to make one smallish crazy quilt.  I have an idea and a plan, and will not start until summer.

I want to make a quilt for my bed.  Something sedate (unlike the one on my design wall) and tranquil.  It's possible I'll resurrect a UFO for this.

I will finish knitting the two sweaters I have on the needles.  The first one I'll tackle in February.

I'm going to knit myself more socks.  I love hand knit socks.  The pair above have been in process for years.  Over the weekend I picked up sock 1, which only needed the toe knit.  Since then, I've made substantial progress on sock 2: I turned the heel this morning.  If I set my mind to it, I could knit a pair of socks in a week or two.  I'm going to knit lots of socks this year.  For my next pair, I'm going to experiment with after-thought heels.

I think that's enough: a guideline for the new year, but nothing too rigid, with room or spontaneous projects and for some on-going charity stitching.  Wish me luck.
at January 07, 2014 4 comments: 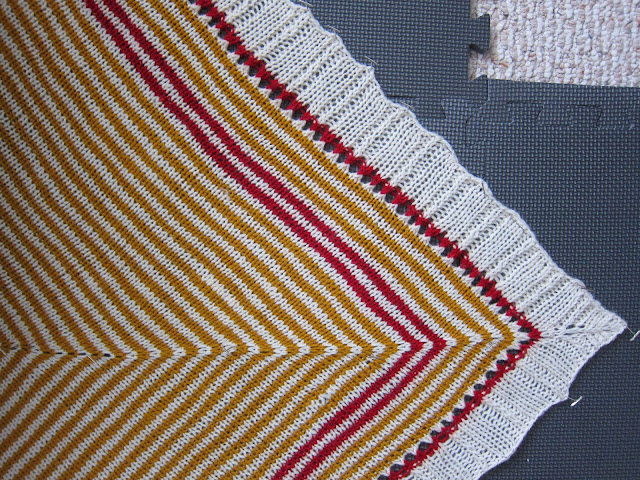 It seemed only fair to finish up some UFOs before I started to plan for projects for the new year. 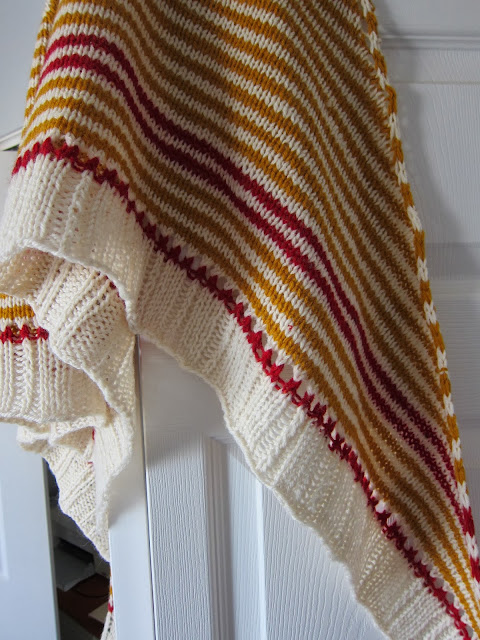 This free shawl pattern Dream Stripes indulges my stripe fixation, though the pattern has a lace border, and I'm not a fan of lace, neither of knitting it nor wearing it. 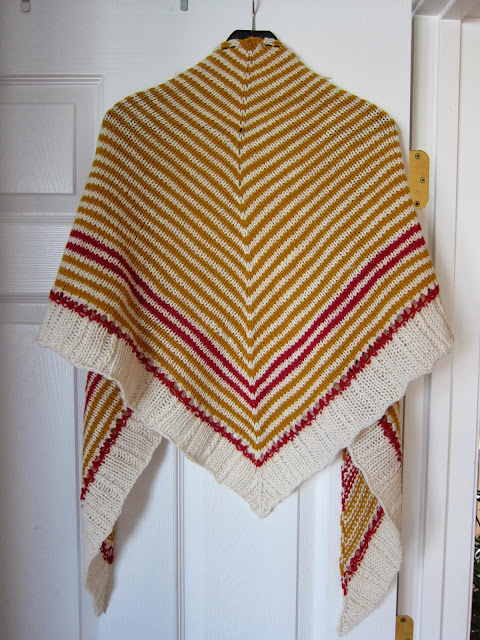 I found a nice ribbed border in another free pattern Mizzle, which worked like a charm.  The yarn is some vintage Lion Brand worsted. 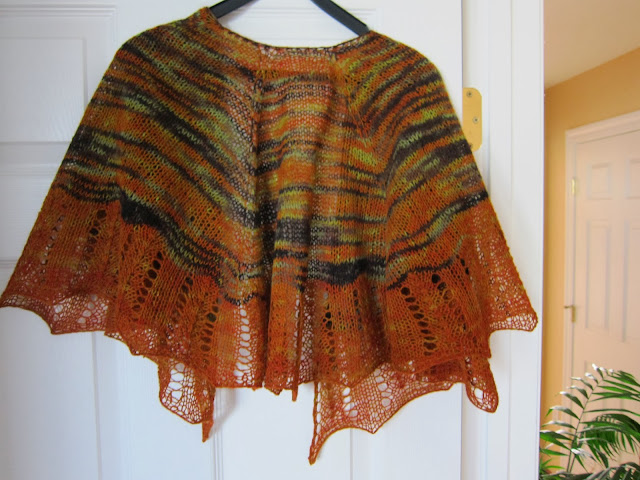 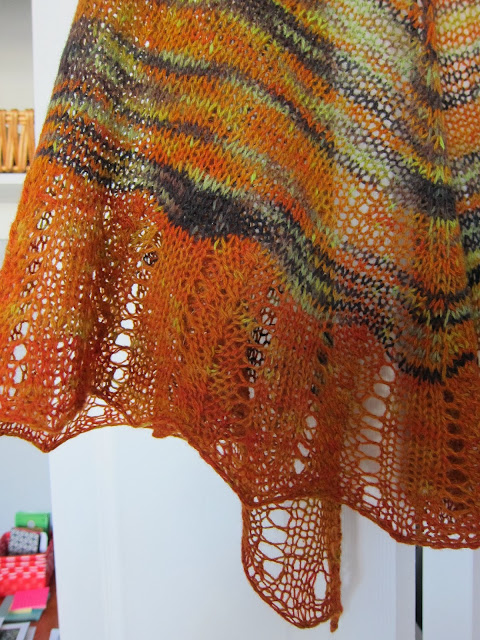 Weekend Shawl has a substantial lace border made up of two separate patterns.  I'd done okay with the first, but the second was kind of a mess. 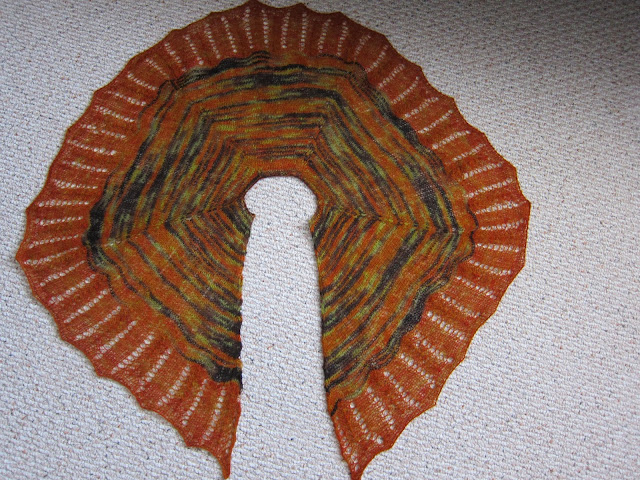 I was able to finish this shawl by ripping out the second lace pattern to a place where I hadn't made too many mistakes.