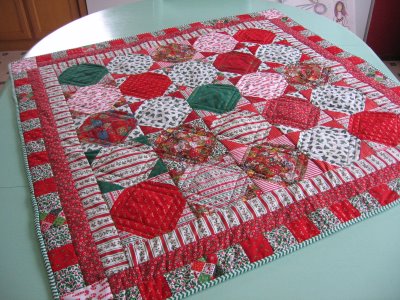 I'm learning a lot about my process through writing this blog. One thing that I'm more conscious of now is that I really seek the serendipitous in my work. My best kind of inspiration is running across something accidentally, especially "found" fabric. I found the fabric for this quilt in the Christmas section of the thrift store. Now I never would go out and buy Christmas fabric deliberately to make a Christmas quilt--for some reason, that doesn't appeal to me at all. But finding scraps of Christmas fabric in the thrift store is like a challenge to me. So I made this little quilt, and on my new machine the whole process was such a joy. The whole experience made me happy as a clam, and I got a quilt for my kitchen table in the bargain.

Here's last year's Christmas quilt, which I made the same way. Hmm...I guess I'm seeing a pattern here...or maybe, it's a style (?) 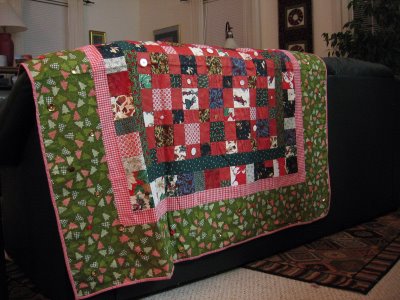 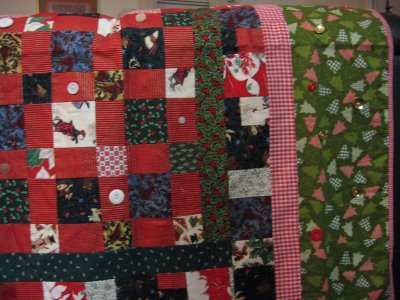 The Dish Ran Away With the Spoon

A couple of weeks ago Debra posted in her blog about how she's inherited a kitchen full of things that she didn't especially care for, but that she couldn't get rid of. I offered her a challenge: that if she would replace a few of her kitchen things with items she liked, I would replace my twenty-year old collection of mismatched flatware with the "good" flatware I've got put away. Well, Debra, good sport that she is, rose to the challenge and bought a nice selection of new dishes. On Thanksgiving, I upheld my part of the bargain.

Here's a shot of my "before" flatware drawer. I started with a nice set of stainless that I picked out in the mid-80s, but that is now seriously missing forks. I also filled in over the years with some cheap plastic-handled pieces that are very flimsy. 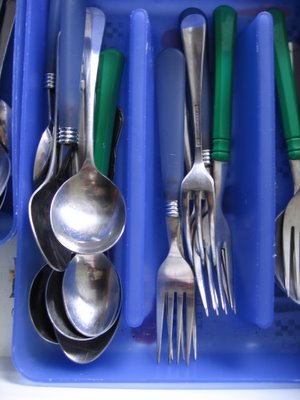 And here's my "after" drawer. I don't know why I've "saved" these for special occasions. They are beautiful and heavy. I love the bamboo-shaped handles, but I bought them at Montgomery Ward on clearance! Sheesh, it's not like they were expensive. I remember when I went to pay, the cashier said, "we had that HERE?" 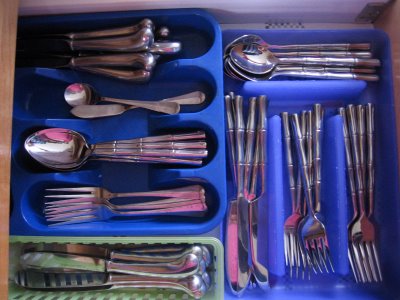 This picture looks pink because I was wearing a pink sweater when I took the photo. I originally kept all the knives and the dinner forks from the old set, but on second thought, I just kept the steak knives and the remaining dinner forks. Michael took the rest to the homeless shelter for me.

How nice to enjoy the things I have, and how foolish to save nice things only for rare special occasions. Everyday is special now in my kitchen. Next, I'm going to clean out my serving utensils...
at November 27, 2005 2 comments: 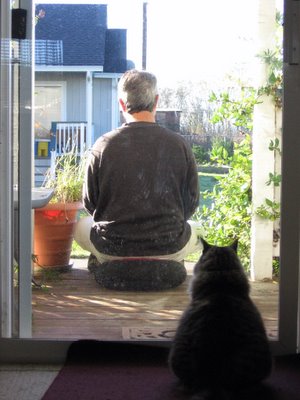 Here's a photo of Michael doing his morning meditation on my back porch. My cat Cleo, aka "Fatty" is doing her's too.

I've also been tagged by Allison, so here's my meme:

1.Three screen names that you've had:
I usually use some variation of my first name and last name initials: barbarac, or barbarabc. When I set up this blog, I chose xicanartista, which is a condensed version of “Chicana artista”—in Spanish the X and the Ch are sometimes interchangeable.
2. Three things you like about yourself:
I work hard, I have nice hands, I have style.
3.Three things you don't like about yourself:
I like to be the boss, I’m stubborn, I can never remember people’s names.
4.Three parts of your heritage:
Mexican on my mom’s side, Mexican and Anglo on my dad’s side. I come from a tradition of working women.
5. Three things that scare you:
cruelty, intolerance, natural disasters.
6. Three of your everyday essentials:
Soy milk lattes that I make myself, even a half hour of creative time, down time.
7. Three things you are wearing right now:
fleece lined clog slippers, Victoria’s Secret spring green thermal p.j.’s (a gift from my friend Bernadette—I guess they make “sensible” things too), my son’s fleece robe.
8. Three of your favorite songs:
Marvin Gaye’s “Mercy, Mercy Me (The Ecology);” Carlos Santana’s “Black Magic Woman;” Bob Dylan’s “She Belongs to Me,” with the great lyrics:” She’s got everything she needs,/ She’s an artist, she don’t look back./ She can take the dark out of the nighttime/ And paint the daytime black.”
9. Three things you want in a relationship:
growth, joy, good conversation.
10. Two truths and a lie:
I’m a vegetarian, I juggle, I love to walk.
11. Three things you can't live without:
My family, acceptance of the way things are, creativity.
12. Three places you want to go on vacation:
Puerto Vallarta (again), Hawaii, Timbuktu.
13. Three things you just can't do:
smoke, be disloyal, pay full price.
14. Three kids' names:
My daughter’s name is Maria Allegra, the Maria part is for my mom and grandmother, though she goes by Allie. Another name I considered for her is Miranda. My son is Alejandro Julian, and although he is Alex to us, he does introduce himself to people as Alejandro. We almost took him home from the hospital unnamed we were in such a quandary over his name.
15. Three things you want to do before you die:
Have mature relationships with my kids, marry Michael my honey, live in an eco-friendly house on a small farm.
16. Three celeb crushes:
Al Pacino in The Godfather, Chow Yun-Fat in Crouching Tiger, Hidden Dragon, Benjamin Bratt in anything.
17. Three of your favorite musicians:
Gillian Welch, I have a weakness for bluegrass and folk music; Chavela Vargas, the classic Mexican ranchera singer, Ruben Blades, the salsa composer and singer.
18. Three physical things about the opposite sex that appeal to you:
a direct gaze, a nice smile, a sense of humor.
19. Three of your favorite hobbies:
making art, knitting, finding new and creative uses for old stuff.
20. Three things you really want to do badly right now:
I’ll agree with Allison on the hot tub, I wish I had one too, though I could go to the gym for a soak. I’d like some toasted French bread with butter. A nice walk in the fog would be good too.
21. Three careers you're considering/you've considered:
I’ve worked since I was 14, so for me a new career would be retirement, so I think about that regularly. Fantasy careers include: professional chef, and textile designer.
22. Three ways that you are stereotypically a boy:
It’s hard to think of a “male” quality that isn’t also a “female” quality, but I can take charge, lift heavy items, and take the initiative.
23. Three ways that you are stereotypically a girl:
I cook, I like a clean house, I’m nurturing.
24. Three people that I would like to see post this meme:
I’m not sure who hasn’t been tagged yet. I’d say if this looks fun to you, dive in.
at November 20, 2005 4 comments: 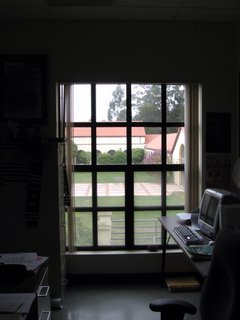 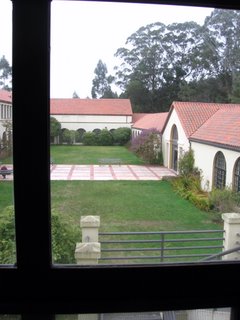 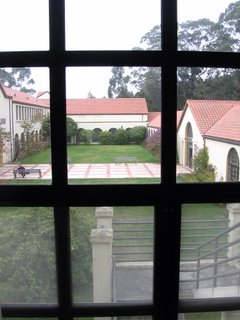 I have a very nice office for a public employee. I work in a vintage building that was constructed in 1916 or so as a regional teacher's college. The best part is the lovely view of the courtyard. In the spring there are flowering lilacs outside the window, and I can always see some redwood trees in the distance. I usually don't spend much time gazing out the window, however. Usually I'm fighting with my obsolete Mac, or talking to students, or madly trying to get ready for a class. But good vistas are a blessing.
at November 16, 2005 7 comments:

When Debra recently posted about her new sewing machine it coincided with my own thoughts about taking the leap into the 21st century with my equipment. For ten years I’ve been sewing on my trusty 1970s Viking, which I bought used, and which has served me well ever since. The only other machines I’ve added to my collection since I became a quilter is my Featherweight and my Singer 301, both wonderful machines, but which don’t have any modern features. My Viking recently stopped zig-zagging, and the needle down function has been unreliable for some time. I sew almost every day, so I began to think very seriously about a new machine, and when I took the old Viking to be serviced, and when I added up the repair costs, I decided to take the leap and buy a Janome 6500.

Now, the new machine and I are in our honeymoon phase. I’m learning to thread it and wind the bobbin, and I’m making a sampler with all of the wonderful embroidery stitches. This machine has and automatic needle threader—how did I every live without this? And I’ll tell you that the hands-down best feature so far is the thread cutter—you push a button, and it cuts the thread the perfect length, no more cutting too short and having to re-thread the needle.

I feel like buying this machine is both a great luxury and one step in taking my artwork seriously. I brought my Viking home—the shop wouldn’t take it in trade. We spent many many hours together on this creative journey, and it has earned its retirement.
at November 12, 2005 1 comment: 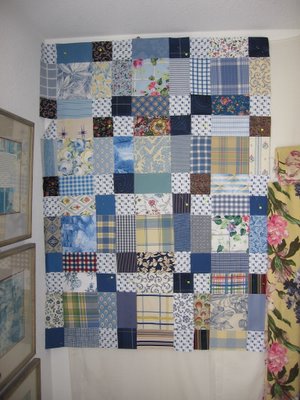 I've long been interested in the idea of using home dec fabric for quilting. There are a range of fabrics available that can coordinate with one's decor, and the choices are different than what one can find in quilting fabric lines. Many home dec fabrics are 100% cotton, though of course there are blends and wonderful natural fabrics.

Because I am cheap, the discontinued sample books of home dec fabrics have attracted my attention. You get a big variety of coordinated fabrics, and I keep running across them in thrift stores. I've found collections by well-known designers with just enough of a fabric sample to do something quilty. 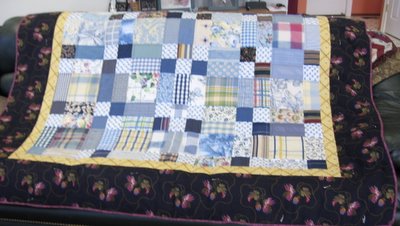 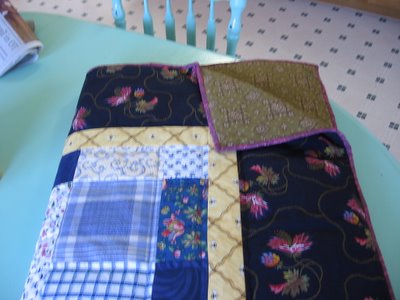 The quilt I'm showing you was made with a couple of sample books and with conventional cotton fabric. When I got the sample books I pried them apart with a flat screwdriver. They are held together with heavy duty staples, but they come apart fairly easily. Each sample has a glued-on label. Some of these peel off easily and some don't. I get off as much paper as I can, and I trim off any parts of the fabric where the paper remains. I sort the fabric by fiber content, and then by color, and I machine wash and dry everything. It comes out very wrinkled, but it also gets pre-shrunk. All this fabric is labeled "dry clean only," but it's cotton, which we know can be washed. Washing likely compromises the scotchguard, but since you're not upholstering anything, it doesn't matter. Once it's all clean and ironed, I cut it into the desired quilt pieces.

For this quilt I selected a bunch of blues and put them together for a scrappy quilt. I chose a border that had an upholstery look to it, though it is conventional quilt fabric.

One thing that really interested me in using sample books was a Kaffe Fassett pattern for a hatbox quilt, which he made in upholstery fabrics. I've made blocks for this quilt as well, but I haven't assembled them yet. Next time I take the camera into the sewing room, I'll snap some photos of the finished blocks.
at November 05, 2005 5 comments: