Sometimes I get a terrific craving for piecing. It's probably the part of quilting that I love the best.

It's especially satisfying to go through the scraps and freely compose something as I go along. 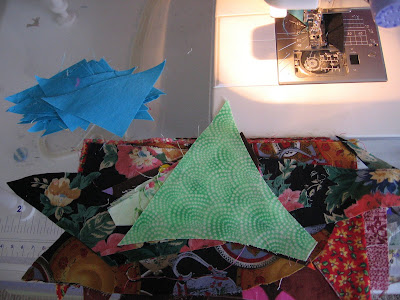 I think piecing satisfies a lot of psychological needs: the urge to create, to transform the mundane into something beautiful, or at least useful. It can satisfy the desire to follow impulses and to see how one decision can impact the outcome of a project. 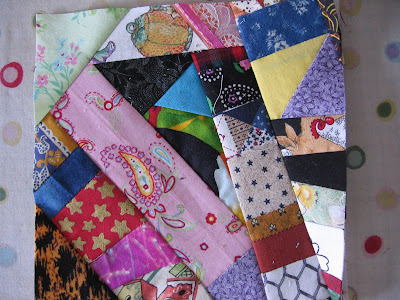 Piecing satisfies the desire to create unity from fragmentation, to put things together, to make a whole from elements that are small, mismatched or insignificant. To piece is to experience control. 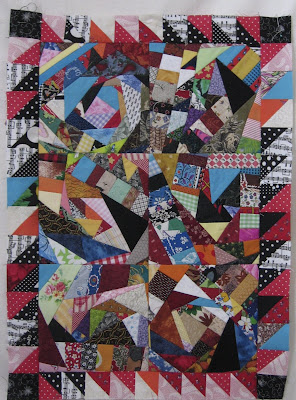 Sometimes piecing creates order, and other times it seems to celebrate chaos. I think I like celebrating chaos the best, perhaps because it gives me a break from my regimented life. 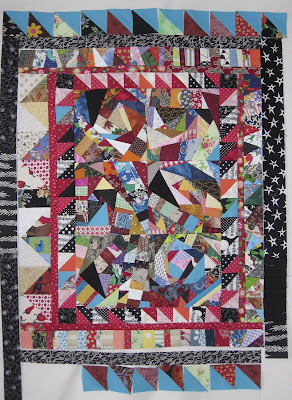 I find free-form piecing satisfying because it lets me see how far I can bend the rules, and when I need to insert orderly elements where the eye can rest. 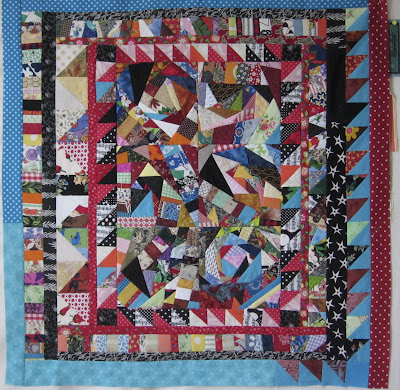 This little quilt is asymmetrical, but it is also perfectly square. As I was making it I thought about a quote I recently read from Cezanne: "We live in a rainbow of chaos." 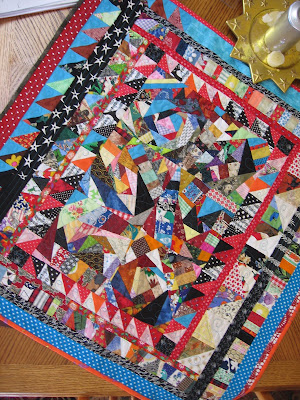 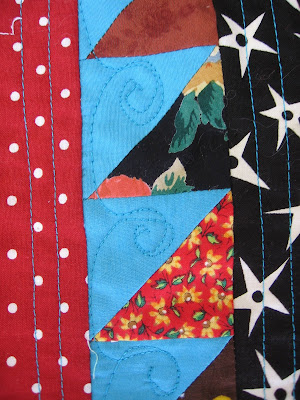 Here are some close-ups of the free-form quilting. 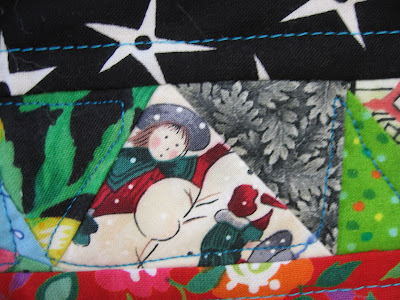 I like the impact of the piece as a whole, but also the little surprise images in the piecing 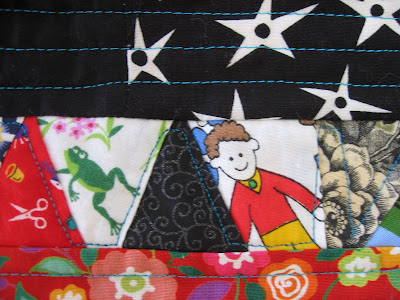 Deal of the Week 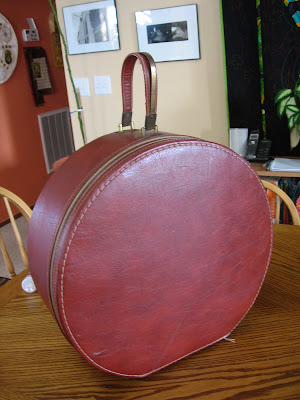 This is what I found at the thrift store this week. It was marked $2.00, but it was half-off day, so I got it for a dollar. I've always wanted one of these overnight cases, and of course getting it for a dollar added to the thrill. I love round things, and these always remind me of something Audrey Hepburn would carry to Europe in the movies, or maybe something Marlo Thomas as Ann Marie in That Girl would carry to visit her parents in Brewster. 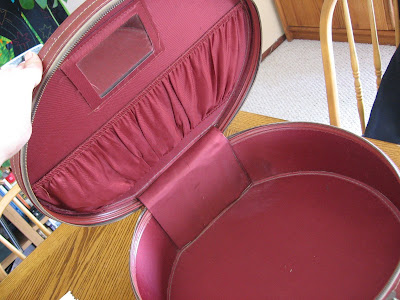 The inside is in perfect shape, no tears and no ruinous stains. I decided to use this case for my knitting WIPs. 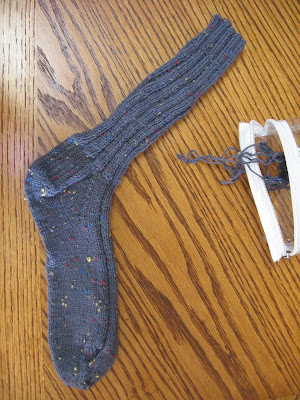 First, there's the sock I made. I've only got about an inch done of the mate, but once in awhile I put on the single sock and admire how cozy it is. 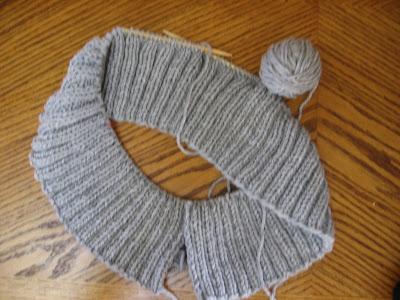 Then there's the collar of the Vogue Sweater I'm knitting with Catherine and Susan. We're chronicling our progress on our blog. 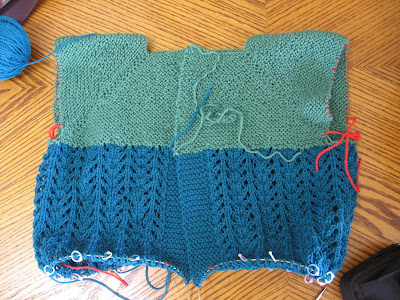 On top I put my February Lady Sweater, which is very popular on Ravelry. I'm doing mine in two-tones, though I haven't decided if the sleeves will be green or teal. 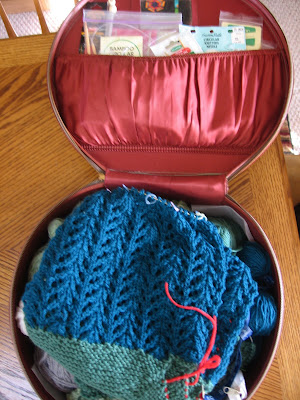 The needles and other paraphernalia fit nicely in the pocket, and it looks great standing next to my chair in the living room. It's an improvement over the overflowing basket, which I've reorganized so that it's less of an eyesore.

I don't think Audrey nor Ann carried knitting in their round overnight cases. Poor things didn't know what they were missing.
at November 17, 2008 12 comments: 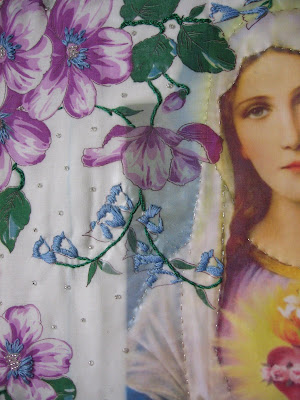 I've had the chance to do some work on "Rejoice, Mother." I think the fabric collage is one of the strongest part of this piece, so most of the embellishment I'm doing right now is embroidery over the existing prints. 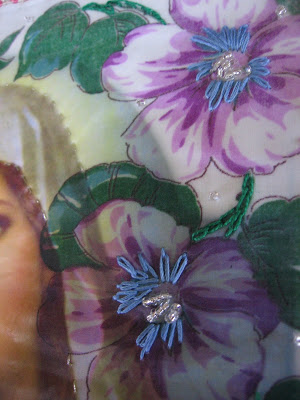 I've embroidered over vines and some parts of the flowers, outlined the virgin's image in metallic thread, and I've beaded the large flowers and the background to hold the layers together and add sparkle. 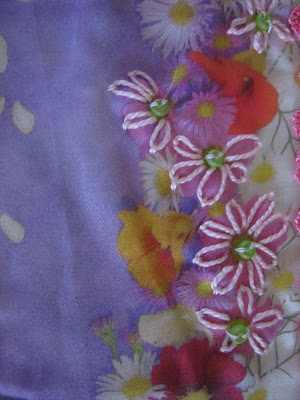 I've done some simple lazy daisy stitches and beading on the silk panel from Allie that's incorporated into the composition. I'm in the process of outlining the word "rejoice" in the panel and I'll probably go back and satin stitch over the letters.

Both Susan and Jane Ann had recent posts about dresses, so I thought I show this little dress that I've hung up over my sewing machine as a decoration. 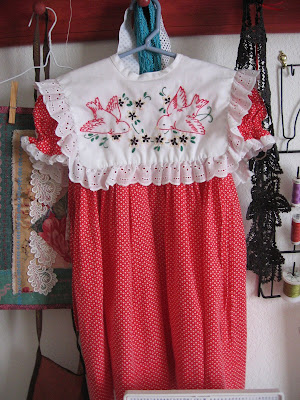 I made it for my daughter for her second birthday. It has snaps in the back instead of buttons, because I had not yet learned to make buttonholes, but it was the first of many dresses I've make for her over the years. 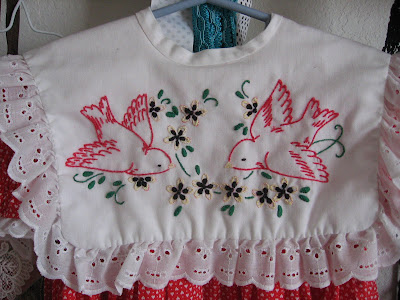 The pattern on the collar was embroidered from an Aunt Martha transfer. I loved this dress, though Allie only wore it for about 10 minutes that day. Her first act as a willful two-year-old was to decide that she didn't like it.

I ended up sewing a lot for both my kids in those years. I worked part time and was finishing my dissertation, but I would stay up late or get up early and make little shorts, pants and dresses for them, and I also sewed for myself. At one point, I had made most of my own clothes. Because we lived in Southern California at the time, it was pretty simple to do since I wore cotton almost exclusively.

I remember once I ran across the garage sale of a guy who had a factory that made the cotton pants ("jams") that were popular among surfers at the time. I came away with yards and yards of fabric and for years after the kids and I wore a lot of the bright colored faux South Pacific prints. We were the SoCal version of that scene in The Sound of Music when Maria the governess makes play clothes for all the kids out of the curtains.

I started quilting because of all the scraps that accumulated from these projects. My first quilts are like swatch collections of the clothes we wore when my kids were little.  The lime green Tiki masks bring up especially fond memories.
at November 07, 2008 8 comments:

The Days of the Dead 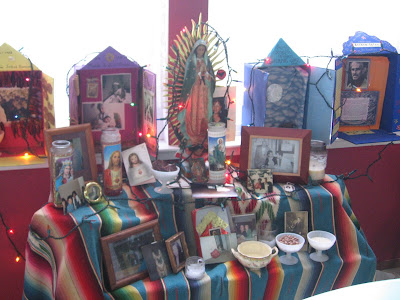 For years we have put up a Day of the Dead altar at my house. Remembering is a critical act for individuals and communities, and so for a few days a year we construct this monument to our past.

The Days of the Dead in Mexico were celebrated by indigenous people before the Spanish conquest. They dedicated a whole month to the event and believed that the division between the living and the dead was especially porous during this time. These beliefs and practices were merged with the Christian observation of All Soul's Day. In the present day, people construct offerings for the dead in their homes and in cemeteries in a profound celebration of nostalgia.

Allie put up this year's altar: she's a very nostalgic person and she's taking a Sociology course on death and dying, so the dead are very much on her mind these days. Over the years she and I have made spirit houses to commemorate very important people to us. 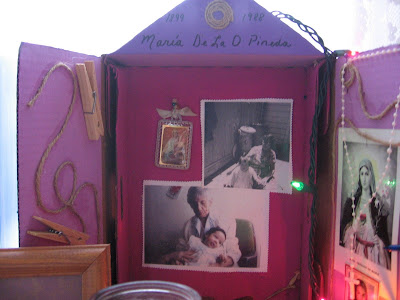 I made this spirit house for my maternal grandmother María. She was born in Mexico and had a very hard life, most of which was lived in extreme poverty. She never learned to read or write, but she had a dry wit, and would make jokes and play with words in ironic ways. Some of her jokes I would only "get" much later. In Spanish the word for leftovers is "sobras" and the word for nieces is "sobrinas." My grandmother always called leftovers "sobrinas," as in "let's have some nieces for lunch." For years I thought that "sobrinas" was the real word for leftovers.

I put clothes pins and twine in her spirit house because she seemed to be always doing laundry, and she always had perfectly starched tablecloths and curtains in her kitchen. She was religious and prayed the rosary daily, often with the telenovelas playing quietly on the TV. 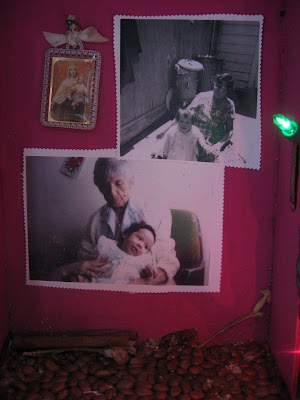 The photo on top is one of me with my grandmother, and the one on the bottom is a photo of her and Allie. I put beans and cinnamon sticks on the bottom, because these were the smells of her house. My grandmother unfortunately died within three months of Allie's birth. 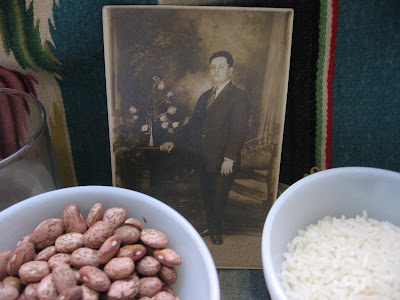 Her husband, my grandfather Luis, who was born in Urápan, Michoacán, Mexico in 1886, is on the other end of the altar. He died when my mother was 12, so I never knew him. He was apparently kind of a dandy. He had beautiful handwriting, and he liked to have his photo taken. He was a laborer and a musician, who my mother says played all string instruments until he lost a finger in a bar fight, and he loved the opera. 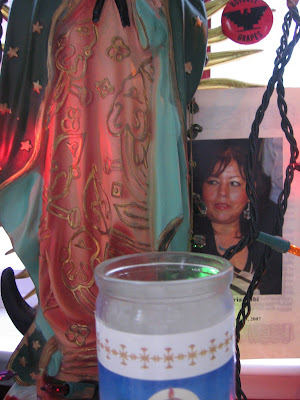 My cousin Madi died last year very suddenly. She was a teacher and community activist who was loved by her children and grandchildren. She was very interested in our family history. 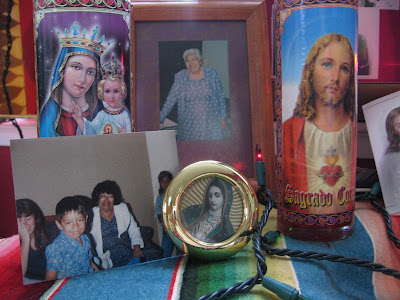 Allie wants to make a spirit house for her dad's mother, who's in the unframed snapshot. Cecilia was a loving, smart, self-made business woman. who died too young from cancer. She had 8 children, and was the heart and soul of her family. Her mother, Micaela, to whom she was devoted, is in the framed photo in the back. 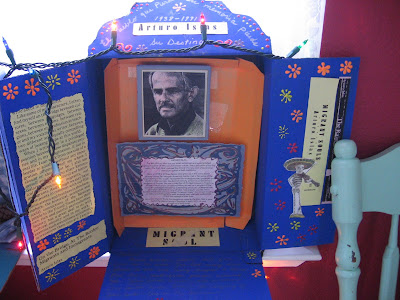 This spirit house is for Arturo Islas, a teacher, and friend who I studied with in graduate school. Arturo died in the 1990s from complications of HIV/AIDS. He struggled for years to publish the novels that established him as an important writer: The Rain God, Migrant Souls, and La Becky and the King of Tears. He was also an accomplished poet. 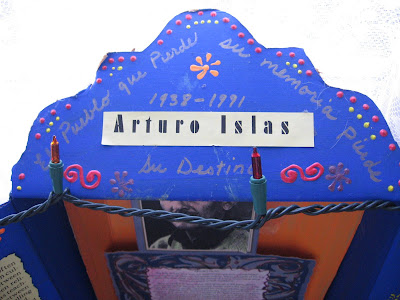 At the top of his spirit house is a caption: "El pueblo que pierde su memoria pierde su destino," A people that loses its memory loses its destiny. This sentiment reminds me that nostalgia and memory are purposeful, that they help us to remember who we are in the present, and shape who we will be in the future.