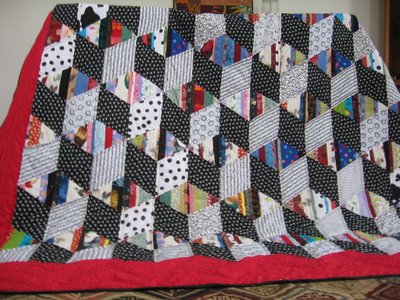 Here are a few things I've finished lately. First, I've finished a quilt that's been moved from chair to table and back for months in my sewing room. I call it "Boxes of Ribbons" and it's about 85x89 inches. I love this pattern, which is loosely based on a Fons and Porter design. I may have to keep it for myself, as these colors are pretty bold for most people. Here's the back: 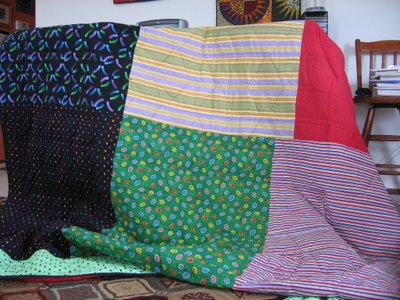 And here's a purse I knitted for my niece Maria, who recently turned 15: 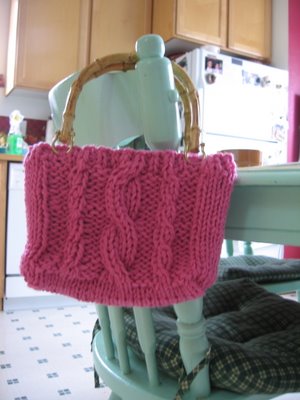 The pattern is available free from KnitPicks.com. The pattern is called Chunky Cable Handbag and I knit mine on size 11 needles with two strands of worsted weight yarn. It knits up very quickly in a few hours. 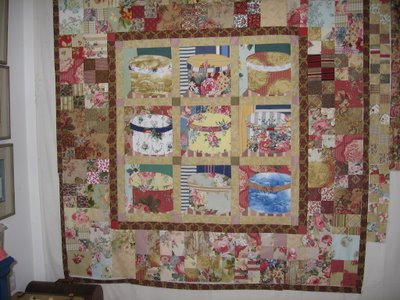 And this isn't finished, but here's the hatbox quilt, coming along nicely. I have to decide if I'm going to add more borders (see the trial on the right side) and make a bed-sized quilt, or if I will finish it at its current size for the living room sofa. 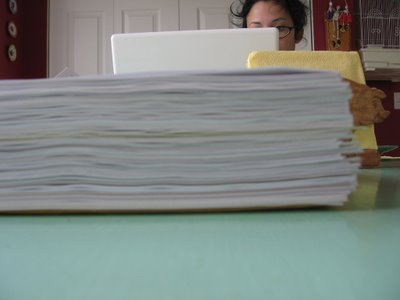 Here are all the term papers and essays I finished grading this week. Whew! I've got a week or so off, and then I teach five weeks of summer school. You know what they say about idle hands.
at May 20, 2006 7 comments:

Cinderella goes to the Ball 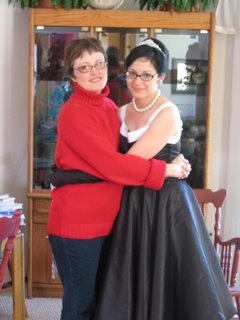 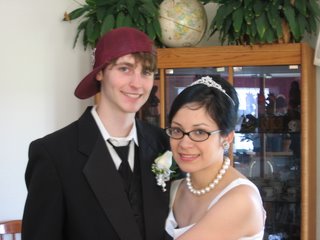 So I finished the dress in time--thank goodness for the machine blind hem function because that was a very full skirt. Cinderella went to the prom and a good time was had by all. 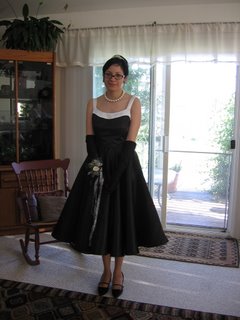 This was a re-issued Vogue pattern from the 50s. Unfortunately, I think they used the original (bad) instructions, but in the end the dress and the princess looked fabulous. Audrey Hepburn is our fashion goddess, in case you couldn't tell.
at May 16, 2006 6 comments: 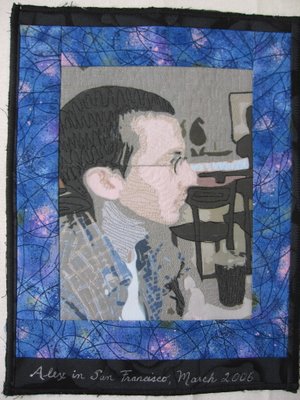 So it's May and I'm posting my April Journal Quilt. Better late than never, right? This is a portrait of my son Alex who's 15. I took his photo in March on a trip to San Francisco. I manipulated the photo in Word, as I described in a previous post, and printed it on fabric. I then bought threads to match the colors in the photo and free motion quilted it to add texture. I didn't photograph the back, which is a grey cityscape print. I love the way it came out. 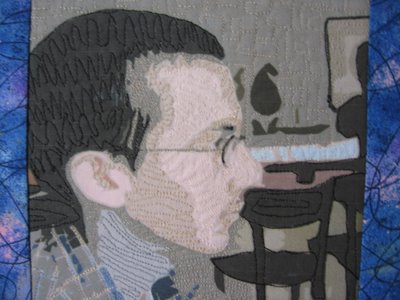 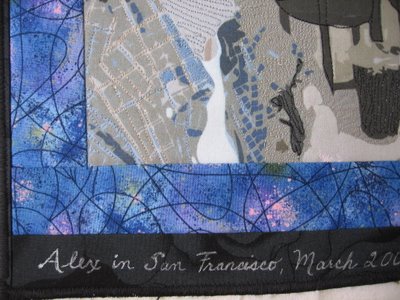 This was mostly a machine quilting exercise. In the future I might play more with the quilted patterns over different parts of the image, and with using the quilting to emphasize contours. Instead of matching the thread to the image, I might play with contrasts. Mostly I wanted to practice controlling the quilting within small spaces.
at May 08, 2006 7 comments: 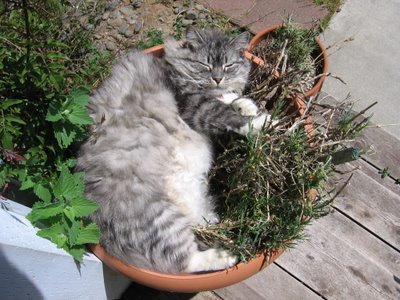 I keep a pot of catnip on the back stairs for my cats and it's a magnet for every feline in the neighborhood. It's like my house is a crack house for cats some days. My own cats enjoy the catnip, but Fatty enjoys it more than everyone else. She gets in and rolls around. She is, as one friend of mine notes, a "cat of size," but the poor plant still survives somehow, maybe the fact that it shares the pot with a carnation plant offers some projection.

When I moved into this house 8 years ago Fatty lived next door with a college girl whose father had bought the property as an investment his daughter could live in while she went to school. When the girl graduated, she rented the place out and left poor Fatty behind in the care of a string of renters who didn't take very good care of her. The poor cat is very people-oriented, and she was desolate, living in the street taking handouts from the neighbors. She had been adopted from a shelter in the first place, so being homeless must've brought up that old insecurity and fear. I first started feeding her, and then, in the winter, she started sleeping in my garage. Fatty and I built up a rapport, in spite of the fact that my then-husband didn't like cats and objected to the idea of a second cat when he wasn't that crazy about the one we already had. When we split up, Fatty moved in and became part of the family. Poor girl has heaved many sighs of relief ever since. She's got beds and chairs to sleep on, plenty of food, and now a third cat to compete with for control over the house. What more could a cat ask for?

Fatty is the smartest cat I've ever had. She's dog-like in that she's very attuned to people and their actions. She's got me trained to let her lick my cereal bowl after I'm finished eating breakfast. I never remember, but once she sees me with the bowl, she meows to remind me, and waits patiently until I finish and then put down the bowl. [Note: then the bowl is thoroughly sterilized in the dishwasher.] My son eats cereal too, but she doesn't want his bowl--either that, or he's not as trainable as I am. She also won't lick the bowl if the cereal has been mixed with soy milk instead of cow's milk, so she's very particular. Other than the cereal bowl trick, Fatty is very polite and doesn't beg at the table.

My theory is that she was a person in her previous life and that she did something bad, so she's back as a cat to re-work her way up the chain. Whatever it was she did, I think she's made up for it during her bouts of homelessness. 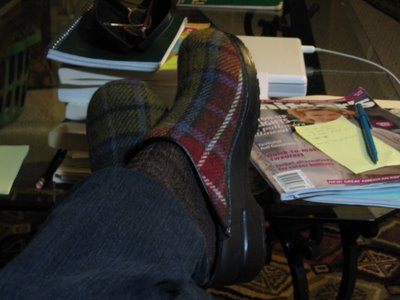 And look at my new shoes. Of course they were on end-of-the-season clearance, but since it's winter here practically all year, I'll get a lot of use out of them. They are very comfortable and warm. The knitting magazine in the background has the sweater pattern I'm finishing up. To me knitting WIPs are less photogenic than quilting ones, so I'll post when it's absolutely done.

This week's sewing time will be dedicated to my annual Make a Prom Dress at the Last Minute challenge. Allie bought a great little black dress for 6 bucks at Ross, but I guess it was too good to be true because when she washed it because she got white deoderant marks on it, it shrunk, even though it said it was washable. So now we're in the race to finish a prom dress by Saturday and I have a really bad cold and I'm also grading finals. We do live dangerously around here.
at May 08, 2006 5 comments: