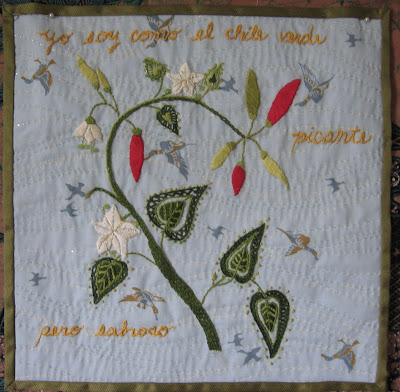 I've finished this piece, the latest in my 12x12 bird series. I have described some of my thinking behind this piece here in the second part of the post. You can see the other quilts in the bird series by clicking on "bird series" in the labels on the right. 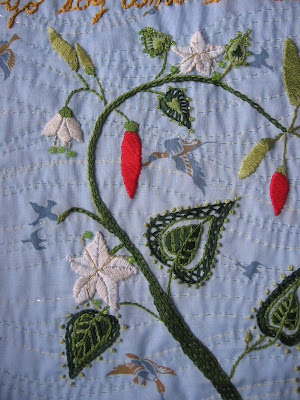 This piece was hand quilted with various threads. I used one metallic silver thread that really gives it a nice sparkle. 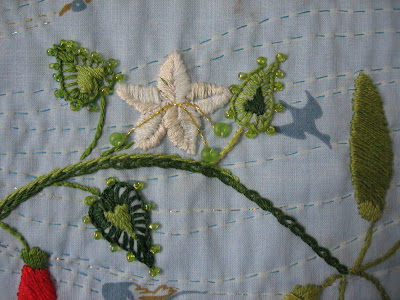 I added a few beaded accents. The fabric has wonderful lines across it to indicate the wind that's blowing the ducks around, and I used these for quilting lines. 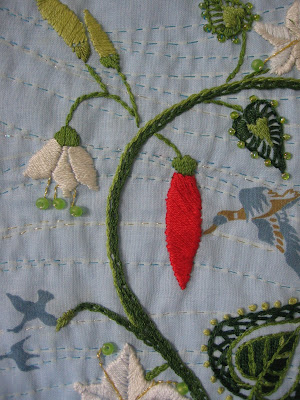 I bound this piece with ribbon and I used some Jacobean upholstery fabric for the back. 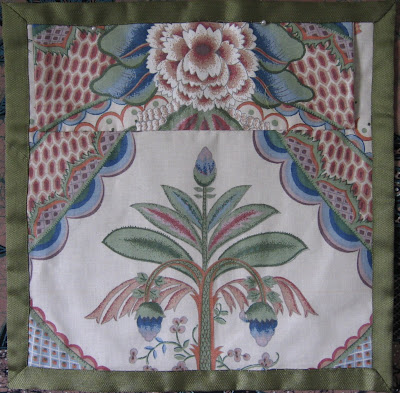 I have ideas for the next two bird pieces, but I'm also making plans for a UFO summer in which I complete some of the oldies but goodies cluttering up my work space.

There's still no firm decision on Allie's art school choice. We're going to Southern California later this week where we'll look at a school where she's on the waiting list. In the meantime, I'm counting the days until the end of the semester and looking forward to summer--the first one in a very long time during which I won't be working.

It's still cool here, but I've been slowly working in my garden. The chard, leeks and lettuce I planted in the fall are growing very slowly, and I've put in some new lettuce and spinach. I almost bought basil plants this week, but I think it's still too cold. It's easy to get overly ambitious in the garden at this time of the year, but the real growing season is still a few weeks away.
at April 21, 2008 12 comments: 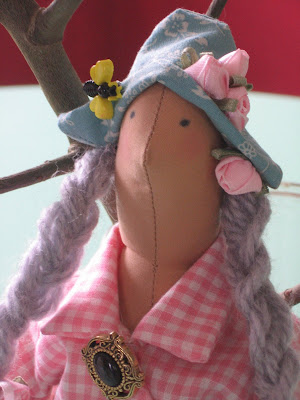 I've made another doll using the same patterns I used to make Ruth.

I'm intrigued with the idea of making dolls that look like middle-aged women, so Flora has long grey braids and a sensible but very spring-inspired wardrobe. I like the idea of an older woman representing spring. 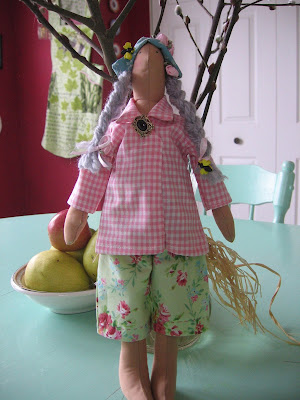 She's got a long blouse and floral culottes. Her hat and pants use some of the fabrics I used to make Ruth. 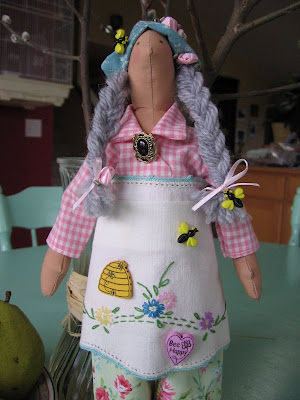 She's got an apron made from a vintage doily and some fun bee buttons. I imagine that both Flora and Ruth are gardeners. So far all of my dolls have aprons. I love aprons, but seldom wear one myself. I remember both my grandmothers wearing them, so I guess that's why I associate them with women-of-a-certain-age. 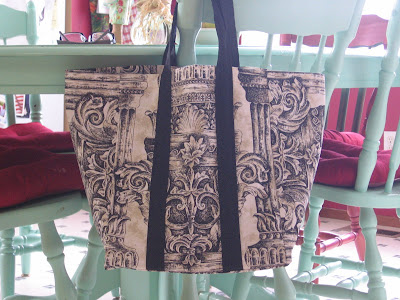 This morning I also made this tote bag for a friend's birthday. It's made of home dec fabric and a great pattern that was free at JoAnn's. The bag is grocery-sized and it took an hour and a half to make. They have various free patterns on tear-off pads in the pattern department. The instructions weren't that clear, but experienced sewers can figure it out.

My work life is a bit hectic these day, but I look forward to my creative time. It's when I re-charge my batteries for the rest of the week.
at April 06, 2008 8 comments: