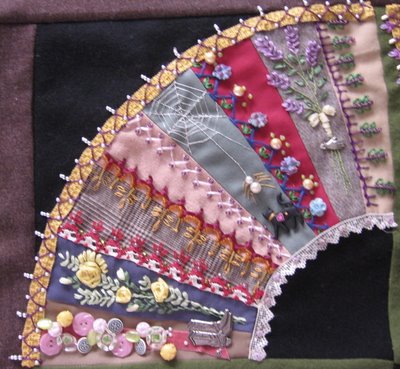 I've finished the second of my four wool fans. I find that I'm using Sharon's 100 details embellishment ideas as a basis for my own improvisation. 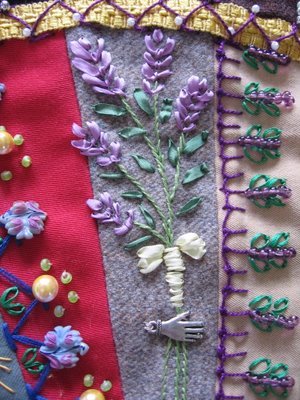 I attached a hand charm to this ribbon embroidery bouquet of lavender, and that's my palestrina stitch on the right as a basis for the beaded flowers (lilacs?) with detached chain leaves.

I'm repeating purple pearl cotton and glass beads, as well as the black cats, to create unity. The gold braid will also be used to trim each fan. In the next fan I really want to try the caston stitch, and some of the straight stitch combinations.
at July 31, 2006 5 comments: 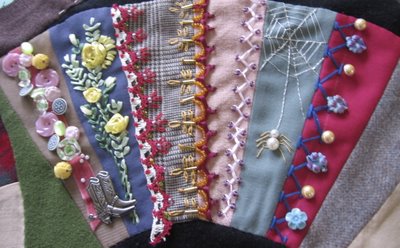 My second fan is coming along. I feel like I'm thinking more about how each block will relate to the others. 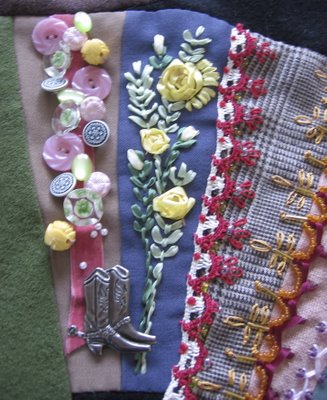 I included in my button cluster a western-themed button cover. I have more that I'll work into the other blocks. 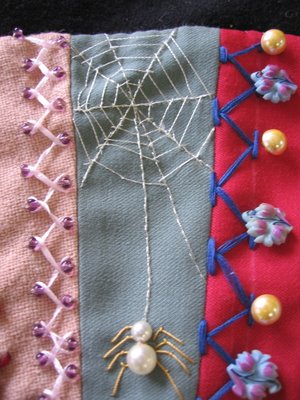 I love my spider and web. The instructions are from Annie's Crazy World (sorry, the link wouldn't work.) I used backstitch on my web instead of straight stitch because my thread was wobbly.

I made these open cretan stitches on the bottom with poly ribbon, which is harder to pull through fabric than silk, and I beaded them in gold. On the top, I beaded a piece of vintage trim. 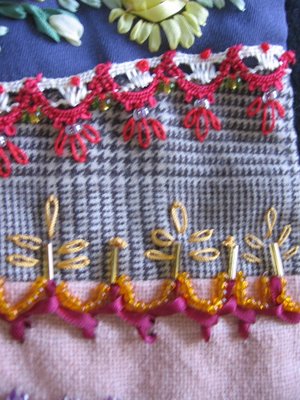 And I have finished this small (45x45) quilt titled "Remapping Arizona." 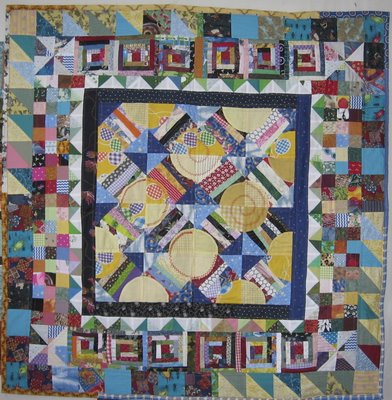 I used this vintage tablecloth for the back: 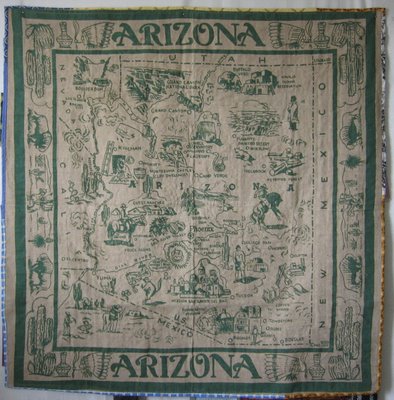 It has a copyright mark. Any guesses about what "USHP" stands for? 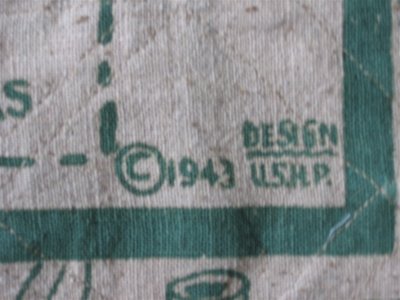 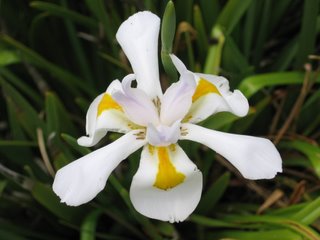 These flowers are for our talented and witty pal Rian because today is her birthday. 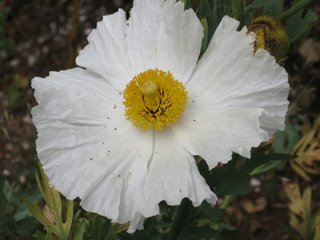 Have a beautiful day Rian. Celebrate your fabulous self.
at July 22, 2006 1 comment: 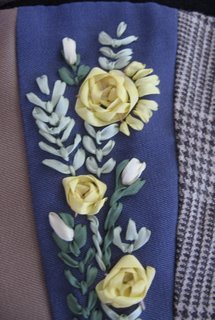 I can't believe I made this with my own hands. Silk ribbon is magic. The stitches are very simple and the results are impressive. 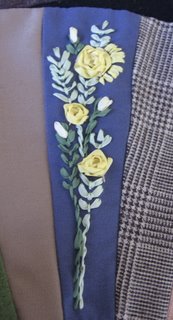 I used Sharon's spider web rose (day 26) and added straight stitches to the outside of the largest one. The leaves are fly stitch with a straight stitch at the top. Everything is so simple.

I also found this book on my shelf, which has some good floral patterns.
at July 18, 2006 7 comments:

I've finished the embellishments on the first of my four fans. I think I'll come back later and embellish the areas around the fans once I've done all four. 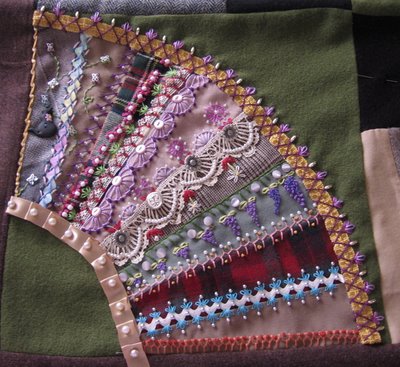 I find myself generally improvising off of Sharon's 100 details ideas: combining things in different ways. Some of the stitches I've used to finish the three blades on the top are: herringbone, whipped straight stitch, feather stitch over the rick-rack with straight stitches and French knots. I tackled that bold red plaid by putting down some small lace with fly stitches, beads and French knots, topped by beaded pink flowers. I'm not sure who's won the struggle for dominance: the flowers or the plaid. 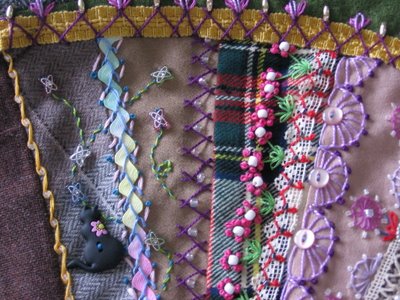 That's a beaded scroll stitch at the far left, which is what came of my attempt at a twisted chain. I found some black cat buttons, and since I have a black cat, I included one in this fan in a vignette where she looks like she's watching the butterfly beads. I liked making the butterflies overlap two blades. I trimmed the whole piece with vintage gold trim, herringbone stitches, gold beads and detached chains. On the bottom of the fan I did that overlapping ribbon treatment with old pearls from a broken necklace.

I must say that this is fun and creative and challenging all at the same time. I'm finding new uses for some supplies that have been hanging around for a long time, and of course, I've been doing some new stash enhancement. In the next fan I think I'll start with some silk ribbon treatments. It'll be fun to try a new medium.
at July 17, 2006 7 comments: 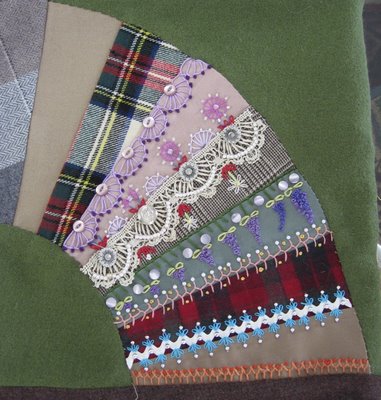 Here's the update on my Embellished Fans piece. I'm continually inspired by Sharon's 100 details postings. I started out with a wide-open color palate, but now I'm working on repeating purples and lavenders as a unifying element of this block. I'm scratching my head right now about what to put on that red plaid fan blade, but I know I'll think of something. 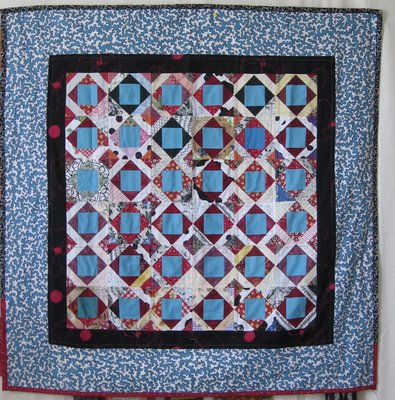 I also finished one of the small quilts I was making. I had previewed it with a large red floral border and got two dissenting votes from Rian and Debra. I went back to my stash and pulled out this blue squggle, which I like a lot. This will be a kitchen table top quilt (it's about 42x42). I like working with this size as I don't lose interest and I can easily machine quilt them myself.

But look where some of those big red flowers ended up: in a purse for my daughter Allie. The bottom part is made of my new fabric fixation, an Alexander Henry print called "Las Señoritas." I've got other handbags planned, and Michael has requested a Hawaiian-style shirt from this print. The figures are reminiscent of 1940s Mexican movie stars. 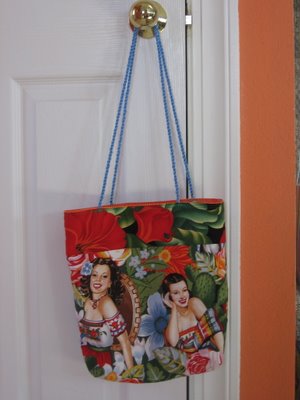 I know Debra and I are both thinking of trying silk ribbon embroidery and I've been looking in my local shops and have found only the most skimpy offerings. If you have a good source of silk ribbon for embroidery, please share.
at July 09, 2006 8 comments: 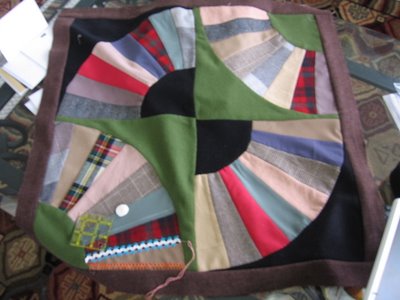 I've joined the legions who are doing Sharon B's 100 details in 100 days crazy quilt embellishments. I went through my wool stash and pieced these four 12" fan blocks so I'd have something to work on. I'd forgotten how different piecing wool is from cotton--it's definitely less stable and more prone to stretch, but I managed to get the blocks together. This wool is from suiting samples and from recycled wool skirts, which is an excellent source of big pieces of wool. The other thing I had to do is to organize my vat of embroidery floss. I don't know about you, but I've got a ton of embroidery floss, and the funny thing is that I can only remember a handful of occasions when I've actually bought it. Maybe floss is like scraps, and it reproduces when you're not looking. More likely, I'm the recipient of other people's stash purgings. In the photo you can see the sliver of soap I use to mark guide lines. It works well because the line lasts just long enough for you to use it and then it's gone.

I have plenty of the requisite supplies on hand, but I have bought some buttons at the thrift store because I want a selection of colorful and small buttons to use as embellishments. If you want to see some eye candy, check out Sharon's I dropped the button box crazy quilt. Debra has also done some good work incorporating buttons into her 100 details. 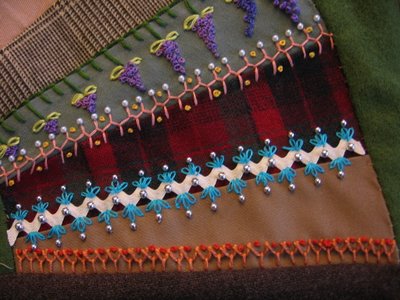 Stitching on wool is wonderful because the fabric gives so much. If someone wanted to try this who had joint problems, working with wool would be a good option to try. I can't wait to see what Sharon inspires us with next.
at July 05, 2006 7 comments: