On Friday Michael and I went to see Julie & Julia, a truly delightful movie in which Meryl Streep plays Julia Child. The movie has a heart warming portrayal of love between mature people: Julia and her husband Paul, and it's also about friendship between women, and blogging! Plus there's food! Who could ask for more?
I was inspired to re-post this blog from 2007, when I finished making my Julia Child doll, which was my response to reading her wonderful book My Life in France.
Here are some final clues to the identity of my doll: 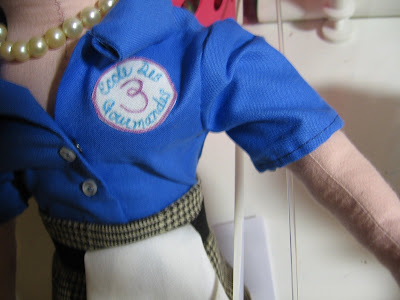 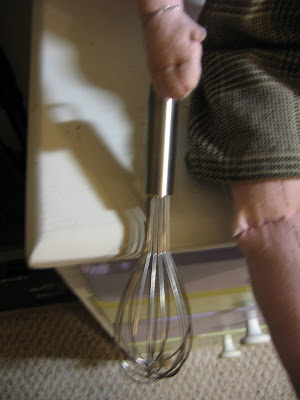 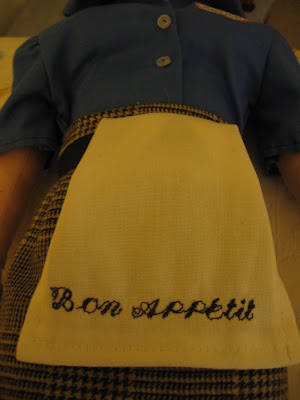 I hope these ring some bells for you. I explained to my daughter that I had made a doll of Julia Child, and she said, "Oh yeah, Rachel Ray talks about her!"

So here's my homage to dear Julia Child. 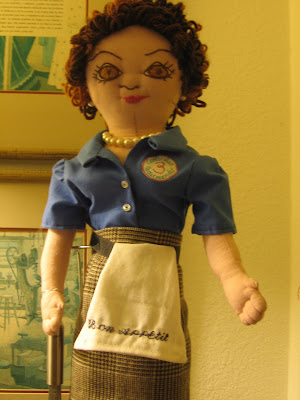 She was an influential presence in my life: my whole family watched her throughout the 60s and the 70s, and a lot of these memories came back when I read her memoir My Life in France.One passage in particular captures my impression of her from her early TV days: 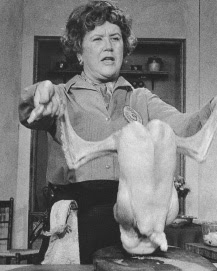 "On the evening of July 26, we ate a big steak dinner at home and, at eight-thirty, pulled our ugly little television out of hiding and switched on Channel 2. There I was, in black and white, a large woman sloshing eggs to quickly here, too slowly there, gasping, looking at the wrong camera while talking too loudly, and so on. Paul [her husband] said I looked and sounded just like myself, but it was hard for me to be objective. I saw plenty of room for improvement, and figured that I might begin to have an inkling of what I was supposed to do after I'd shot twenty more TV shows. But it had been fun."

Julia Child was America's first celebrity TV chef, but she began her career by authoringMastering the Art of French Cooking, (1961) which she wrote with her French co-authors Simone Beck and Louisette Bertholle, after an extensive recipe testing process than took ten years. The patch Julia wore on her early TV shows, which prior to my research for the doll, I thought was a Cordon Bleu patch (since Julia graduated from that cooking school) was actually a patch her husband Paul designed for Julia and her two French collaborators. In 1952 the three friends started a cooking school in Paris, L' Ecole Des Trois Gourmandes, which Julia translated as the School of Three Hearty Eaters. She wore this patch on her blouse through the early TV shows.

There is a wonderful website at the Smithsonian Museum, where Julia's kitchen from her days in Boston has been recreated with all of its original tools and appliances. She popularized the wire wisk in the U.S., which I included as an accessory for my doll. She also closed all her TV shows with her signature phrase "Bon Appetit!" which I machine embroidered on her dish cloth.

I wrote the following poem a few years ago, calling up some of my youthful memories of Julia. I hope the doll captures some of her hearty and creative spirit.

We’re lined up on the cracked vinyl couch
waiting like soup kitchen diners
for Julia Child to light up
our living room
with her mannish hands,
her schoolgirl squeals.

We’re waiting to see Julia cleave
knives to slabs of meat
and dump the scraps on the floor.
She always sticks her fingers in the food
and then puts them in her mouth.
She’s sweaty and dishevelled as a saint
before a vision of God.
We’re waiting to witness her rapture.

Today Julia pulls bolts of tripe
in ascending sizes from off-camera.
White fields of fat and muscle,
blankets of honeycombs,
only Julia would bring out these pieces
huge like winding sheets for the dead.

We’ve never seen a woman
handle so much meat
and as off-handedly as if she were
unfurling towels for the clothes line.

And menudo, of all things,
a la francaise, who was to know
that anyone but us Mexicans
crave tripe, which when cooked,
fogs the house with its sweaty smell for days.

My mother clucks her tongue.
La Julia is carving the tripe
into squares big as hands.

My father howls through his
tumbler of red wine, says
she must be drunk, tossing those dirty plates
off-screen without a thought.

But we all love Julia,
wait weekly to see her,
a broad-shouldered
square-bodied woman
who cooks with both hands
up to her elbows in the food
and opens her mouth all the way
to laugh.
at August 30, 2009 9 comments:

Email ThisBlogThis!Share to TwitterShare to FacebookShare to Pinterest
Labels: dolls

The remodel of my ten dollar doll house is coming along. Over the summer I worked on remodeling and furnishing the interior, and the kitchen and patio are done. Come take the tour. 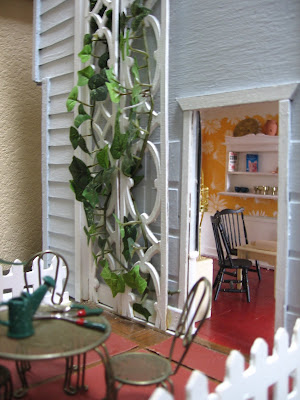 I found most of the pre-made furniture on eBay. My garage is full of a lot of the little boxes the pieces were shipped in. The metal patio set was the last thing to arrive. The gardening equipment was on the button rack at JoAnn fabric. 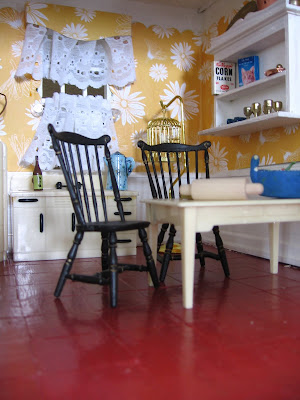 I wanted a 50s kitchen, so I painted the floor red to simulate linoleum. The wall paper is scrap book paper. The kitchen set is vintage doll house furniture. 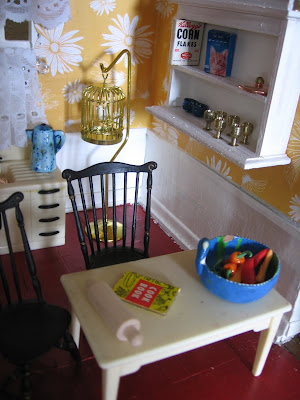 The dishes are pieces I'd collected over the years. I think this doll house is something I've been wishing for for a long time. 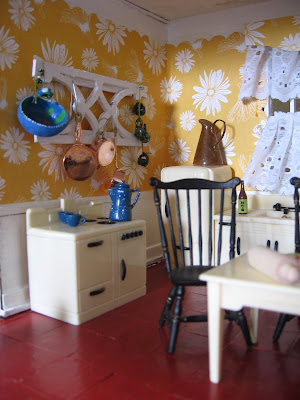 This house has become in some ways a miniature version of my real house: I used the same paint colors--though in different places, and I brought in things like the bird cage that I have in my real house. Two cats have already moved in. 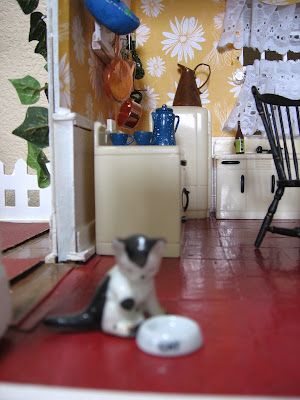 In other ways it's an totally imaginary space, a dream house, a fantasy playhouse.

It's been an interesting experience, one which has caused me to think carefully about what my ideal real house would be like, and about the things I like best about my real house and my real life.

As a reminder, here's a "before" picture of the interior. 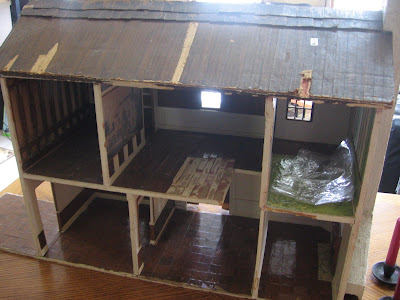 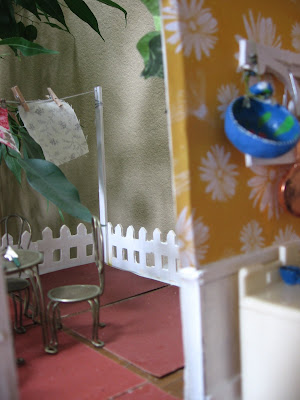 Come again soon. I'm uploading my doll house photos to my Flickr album and you can see the exterior face lift photos that I posted earlier by clicking on the doll house tag in the side bar.
at August 27, 2009 7 comments: 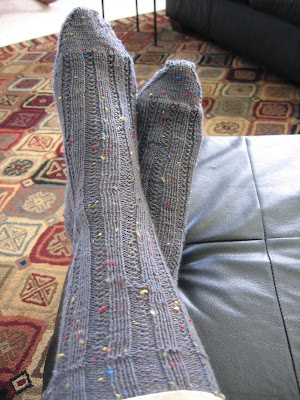 My summer is officially over. I went back to work last week, but I feel like I really rested up. I did a lot of reading, some writing and research, and I finished up some old languishing knitting projects.

These socks are from a great pattern, Roza's Socks, published in the Spring o7 issue of Interweave Knits. I started these socks, honestly, two years ago, but the size zero needles can make for slow progress. I had finished one, and had done a couple of inches of the second one. Then I caught a serious case of the dreaded Second Sock Syndrome.

Somehow, when I decided to finish them, it just took a few days. I don't know why I waited so long. The pattern is well written, and the advantage of the tiny needles is that these socks are very stretchy and fit perfectly. They're knit from Knit Picks Essential Tweed. 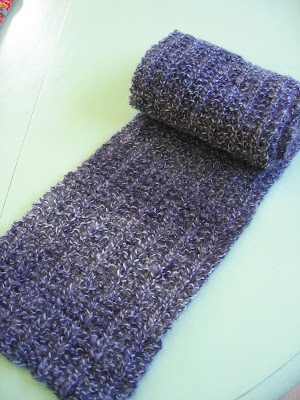 I also finished this scarf, which was on the bottom of my sewing basket for about a year and and half. Scarves make for tedious knitting. This one, made from Stephanie Pearl-McPhee's (the Yarn Harlot) pattern, One Row Hand Spun Scarf, is easy and looks great, but scarves feel like they will never end! This one is knit from some old (like from the 90s) stash yarn, Unger Escapade, 90% acrylic and 10% mohair. It has a great color gradation. But I'm totally done with this scarf. 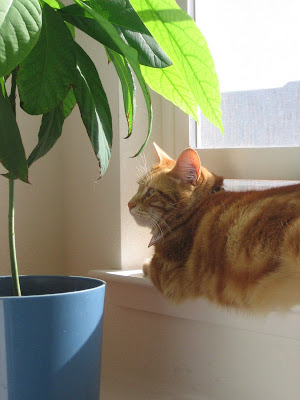 I've spent the last couple of weeks as Cat Wrangler extraordinaire. Allie went on a cross-country trip with her boyfriend, and yes, they seem to have survived the ordeal just fine. They flew to Wisconsin, visited Peter's family, and drove back in a car his parents gave him. They arrived back a bit tired and out of money, but otherwise just fine. 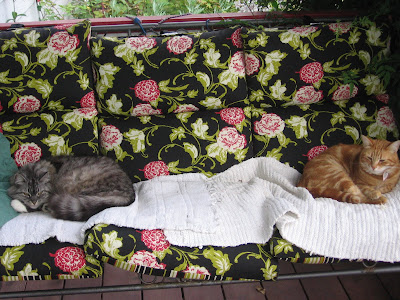 In the meantime, I was here to take care of the four cats. They were mostly well behaved, though they really missed being short one lap. Alex has been gone a lot at his new job as a stocker at a local grocery store. ("Too back you're not a Night Stocker," says his friend Tim, "that would be so cool." Get it? Night Stalker.) 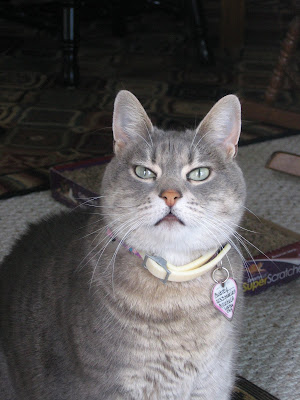 So the cats and I kept each other company. We like it when the house is very quiet. 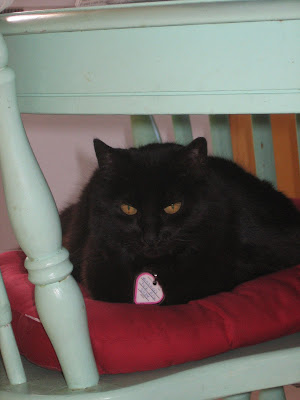 And we're all very happy when it fills up again with noise.

We're all poised to go back to school. Classes start Monday, and Allie begins her last year of community college, and Alex is going to HSU and will live at home for the present. I'm going back to my regular teaching duties, though because of the state budget, all faculty are being furloughed for 9 days each semester: mandatory unpaid leave for us, and canceled classes for students, who are paying higher and higher fees. 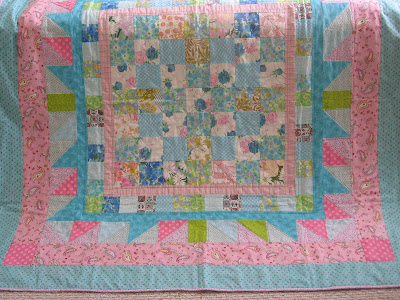 I know I'm not the only one who struggles to finish projects. With quilts I often get hung up on the borders, so the quilt goes into the Closet of Doom until I can figure out what to do. The other stopping place is the actual quilting. I do most of my own quilting. On small pieces I can get fancy and free-motion quilt, but on larger pieces I'm satisfied to do simple straight quilting.

Mary Mashuda's recent book Foolproof Machine Quilting offers very useful tips on quilting your own quilts on your regular machine by using your walking foot and some simple freezer paper stencils. I love all of Mary's work, and I plan to use some of her tips on the stack of pin basted quilts I have ready for quilting.

But in the meantime, I did finish "Caprice," a quilt I blogged about here and here. 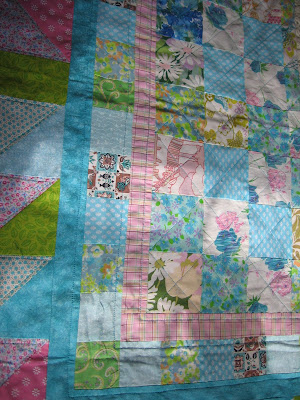 Here are some close-ups of some of the vintage and contemporary fabrics I used. 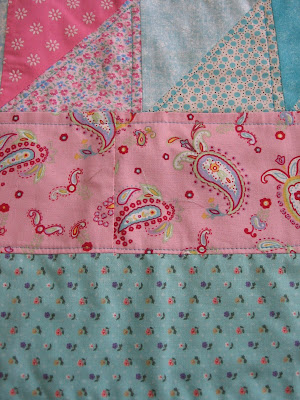 Among my favorite fabrics is the aqua calico I used in the borders. 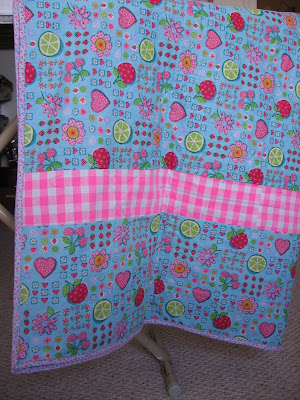 I added a piece of gingham to this lovely bright seersucker for the back. 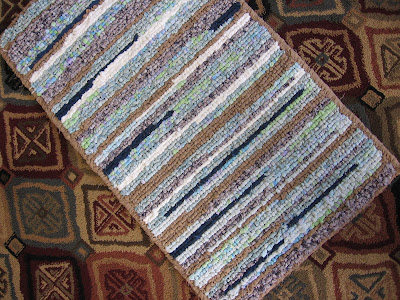 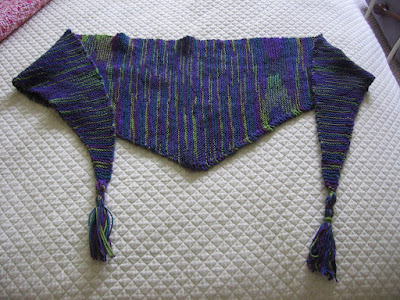 I've finished up a few knitting projects in recent weeks. These are all destined to be gifts. One of the many benefits of living on the coast is that I can knit (and wear sweaters) all year, because it never gets hot here. All these patterns are available free on the web, courtesy of generous blogger-designers, and I've included links. 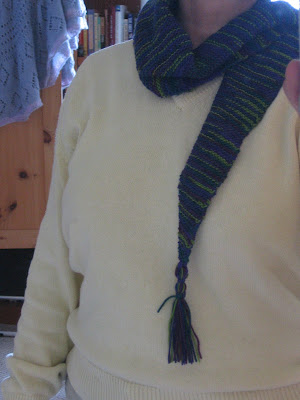 Michael has two nieces who have had babies this year, so I knit Stella a Mossy Jacket from Vanna's Choice yarn. 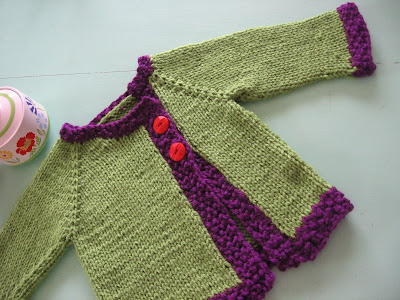 It's a respectable acrylic yarn that comes in great colors. People with new babies don't have time to hand wash sweaters. 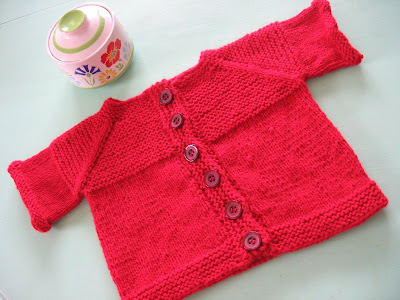 Elías will be getting a red Garter Yoke Baby Cardi made from washable wool and acrylic blend yarn. 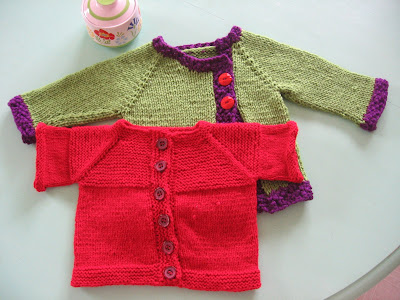 Baby sweaters are a fun project. They finish up fast and use little bits of yarn. Plus who doesn't love a baby in a hand knit sweater?
at August 04, 2009 4 comments: