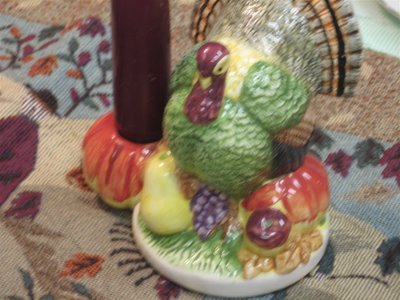 Happy Thanksgiving to All. We had our Thanksgiving yesterday, so here are a few photos of our celebration. Come in the kitchen and pull up a chair. 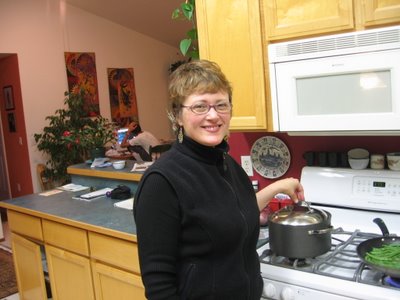 I did cook up a proverbial storm yesterday. At the end of the evening my legs were killing me. 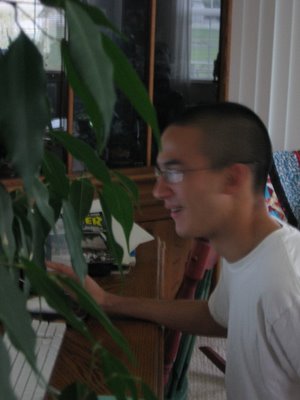 Alex was working on the computer through the day. I had to hide behind the plant and then sneak up on him to get a picture of him smiling. 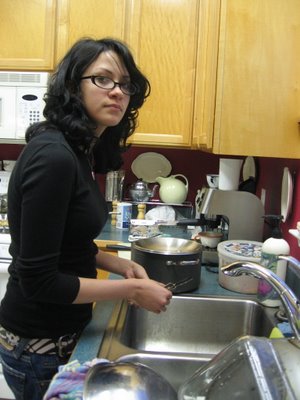 Allie made the mashed potatoes, which were delicious. 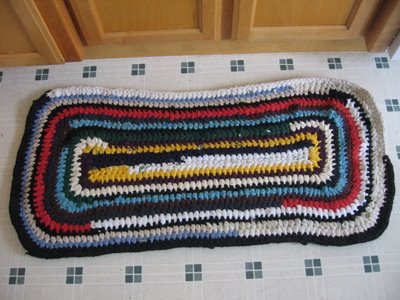 Oh, a crafty aside: the kitchen rug I finished crocheting from old t-shirts. Waste not, want not, right? 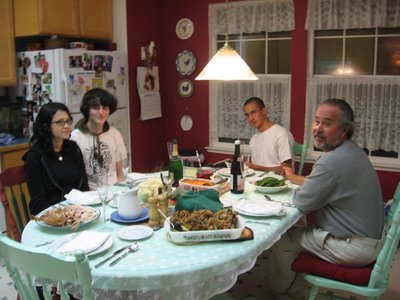 And here's everyone getting ready for the feast. That's Michael my honey on the right and that's Allie's boyfirend Roger opposite him. Yum, we had a great dinner. Many blessing to you and yours on this special day.
at November 23, 2006 9 comments:

Email ThisBlogThis!Share to TwitterShare to FacebookShare to Pinterest
Labels: holidays

I'm going to try to post working links to

yesterday's post. I'm not sure what happened, but I'm hoping for working links.

The Age of Innocence

I think these are going to work. For some reason I couldn't link to the Vogue cover--oh well, two out of three.
at November 21, 2006 1 comment:

Fabric in the movies 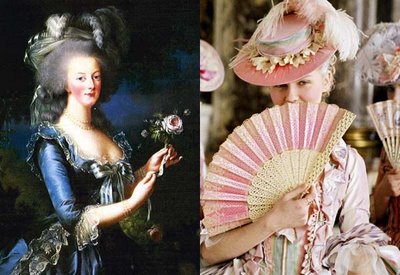 I went to the movies yesterday to see Marie Antoinette with my daughter. One of the benefits of having an 18 year old daughter is that I have someone to go to chick flicks with. I was interested in seeing the film because from the previews and from the Vogue photo spread I could tell that there was going to be some excellent fabric eye candy in the movie. Kristen Dunst was charming in the film. She evolves from a 14 year old princess to a mature woman. But the film is poorly paced, lingering way too long over Marie Antoinette's problem of getting her teenage husband to consummate the marriage. Apparently it took years for this to happen, and Sophia Coppola, the director, seems to have wanted us to feel the full effect of the delay. The post-consummation portion of the story doesn't have much drama, and then suddenly, the film is over.

But the eye candy! The velvets! The ruffles! The tassles! The lace masks in the masked ball scene! The shoes! Oh, and there's cake too. It's worth it to see this movie just to see the linens. Curiously, although the film gives a nod to what we call in literary criticism multi-temporal heterogeneity by incorporating a contemporary rock music score with a pre-rock music era story (which we also saw in the movie Moulin Rouge), the costumes and sets look historically accurate. Or at least what we expect historically accurate to look like through the lens of Hollywood movies.